Learn more
Size750mL Proof102 (51% ABV) *Please note that the ABV of this bottle may vary
This distinctive Ledaig single malt is aged for nearly two decades before being finished in Marsala wine casks.
Notify me when this product is back in stock. 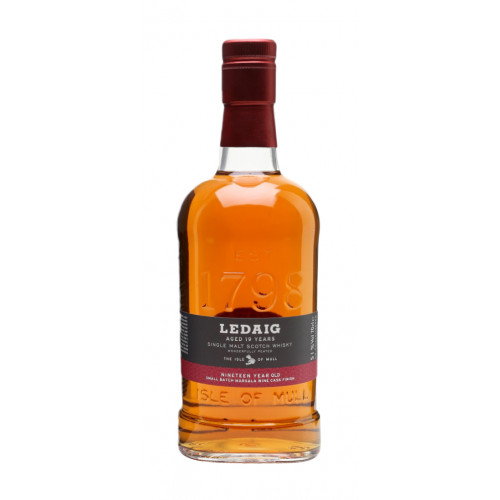 Situated along the Isle of Mull, the quaint village of Tobermory was founded in 1788 by fishermen who began using it as a resting place during their fishing expeditions in the Sound of Mull. The name Tobermory is derived from the ancient Gaelic word meaning ""Mary's Well,""and refers to a nearby well on the Isle of Mull that was dedicated to the Virgin Mary centuries ago by Irish monks who lived on the island. In 1798 — just ten years after fishermen began using the port of Tobermory as a resting place — John Sinclair founded Tobermory Brewery and Distillery. Today, Tobermory Distillery is the last remaining distillery on the Isle of Mull and one of the oldest commercial distilleries in Scotland.

The unique Ledaig spirit is matured in premium oak wood casks for 19 years before being finished in distinctive Marsala wine casks. The end result is a deep, rich, decadent, smoky single malt.

The nose strikes a balance between cracked black pepper peat along with decadent wine, dried fruit, toffee, citrus and subtle ginger and baking spice. The palate is sweet with, citrus, berries grapes, toffee, and subtle dark chocolate, followed by peat smoke. The finish is long with smoke and fruit.