Size750mL Proof92.6 (46.3%ABV)
The second batch of the peated Ledaig whisky from the Tobermory Distillery was matured for 18 years and finished in Spanish sherry casks. Bottled at 92.6 proof, it's a rich, smoky, and fruity expression. 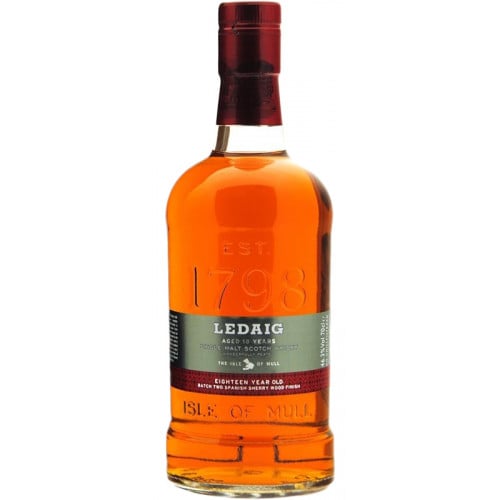 Ledaig Limited Release Batch #2 is made exclusively from Scottish barley that is dried directly over a peat flame. Once the grains have been dried, they are milled and mashed with water drawn from Mary's Well before being fermented for nearly four days in washbacks made of Oregon Pine. Following fermentation, the wash is distilled twice, first through one of Tobermory's copper-pot wash stills, and again through one of Tobermory's copper-pot spirit stills. Matured for 18 years, the whisky was finished in Spanish sherry oak casks before being bottled at 92.6 proof.

Get your bottle of this peated whisky today!

The rich nose has a balance of black pepper, earthy peat, fruit, and spice aromas. On the palate, you'll find fruit, citrus zest, oak, as well as figs and dried fruit. The finish is smoky with hints of brine and licorice.