Size750mL Proof95 (47.5% ABV)
This is true terroir rye whiskey. Crafted with 100% heirloom rye from the Cody family farm in the San Luis Valley, then meticulously distilled and aged for at least 3 years in Denver, it's pure Colorado rye.
Notify me when this product is back in stock. 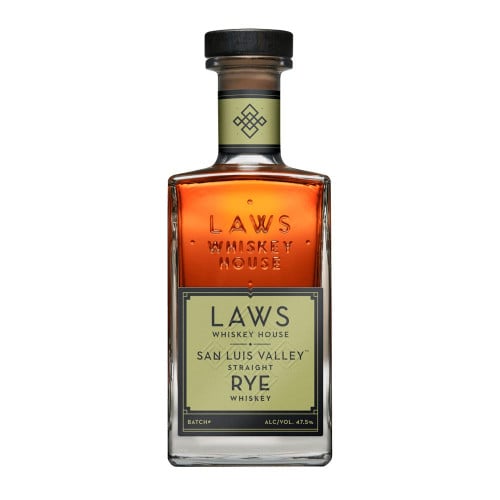 Laws Whiskey House is a dedicated, no-compromise whiskey company. The distillery was founded by Alan Laws in 2010 in Denver, Colorado, in the historic Gates Neighborhood. Laws and his team, nicknamed "The Village", perfected the whiskey over several years, crafting the one-of-a-kind spirit into what it is today: a terroir spirit that embraces Colorado grains, its thin air, hot days, and cool nights of the Rocky Mountain region.

Laws Whiskey takes "an obsessive, hands-on approach to every aspect of whiskey production." Every step of the production is carried out in-house: from the milling, cooking, fermentation, and distillation to aging. They utilize heirloom and heritage grains that are often lower-yield than their modern counterparts that are favored for mass production. These grains come from family-owned farms: the Codys in the San Luis Valley and the Ohnmachts in Colorado. They open-air ferment their sour mash for 4 days before distilling in a custom-made four-plate pot still. Aging takes place in American white oak and takes at least 2 years.

Laws San Luis Valley Straight Rye is crafted with low-yield, semi-wild rye from the Cody family farm in Colorado's San Luis Valley. The Laws team fell in love with the grain that the family has been growing there since the 1930s. It's a fragrant and well-balanced rye that spends at least 3 years in charred oak barrels before being bottled at 95 proof.

Get your bottle of this terroir rye whiskey today!