Size750mL Proof86 Proof (43% ABV)
Aged for up to eight years, this single malt whisky earned the Master's Trophy at the World Whiskeys Master's Competition in 2011.
Notify me when this product is back in stock. 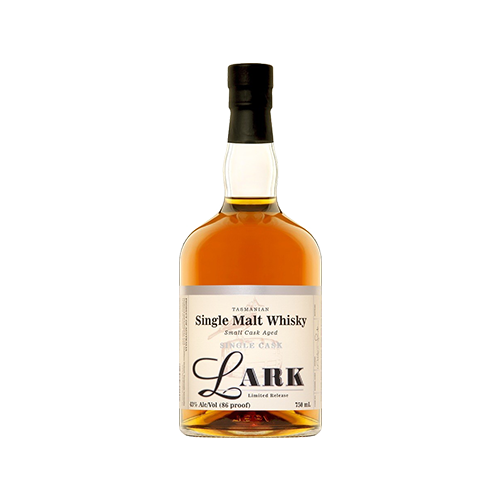 Situated 150 miles south of mainland Australia, the island of Tasmania is known as the "Island of Inspiration,"owing in large part to its relatively unspoiled natural environment — approximately 37% of Tasmania is protected as natural reserves. The island was previously known as "Van Dieman's Land"and was used as a penal colony. In the 1830s, however, the island's governor — concerned about drunkenness among the prisoners and their guards — outlawed distillation on the island. That ban stayed in place until 1992, when Bill Lark successfully challenged the law and opened the doors to Lark Distillery.

Lark is often considered to be the father of Australian Single Malt Whisky. "When it comes to whisky, Tasmania has all the right quality ingredients,"he says. "We grow fantastic, high quality barley. We have sensational sweet, clean peat and, of course, some of the best quality water in the world. But, most importantly, we have the climate, the perfect balance of humidity and temperature, to allow us to mature whisky naturally. As in Scotland, we don't need to create artificial, temperature and atmosphere controlled environments. That makes a big difference."

Lark Single Cask Single Malt Whisky, the flagship of the Lark Distillery, is made from Franklin barley grown in Tasmania. The barley is malted in Hobart by the Cascade Brewery, Australia's oldest brewery. After the barley has been malted, approximately half of it is lightly peated using hand-cut peat from the Brown Marsh Bog, which is situated in the Central Highlands of Tasmania. The peat gives Lark Single Malt Whisky a slightly sweet aroma, and adds a touch of complexity and smoke to the finish.

After peating the barley, Lark ferments it using ale yeast, which adds a slightly floral aroma to the whisky. Following fermentation, the wash is double distilled, first through Lark's 1,800-liter copper-pot still and then again through his 500-liter spirit still. The "hearts"of the second run are then proofed and prepared for maturation. "The art — the thing that determines the quality and flavor profile of your whisky — comes in judging just where you cut off the fores and feints, the early and last parts of the distillation run, to retain the sweet heart," says Lark. "It's a matter of smelling and tasting and experience."

The hearts of the distillate are matured in 100-liter, quarter casks for up to eight years, giving Lark Single Malt notes of dried fruits, plums and rich oily malt, which are followed by hints of vanilla, toffee and smoke on the finish. Each cask is then brought to proof with water from the highlands of Mount Field National Park, and each single-barrel bottle is filled and labeled by hand.

"When our youngest son has gone to bed, my wife will say to me 'I'll get the chocolate while you choose the whisky,'" says Lark.

Enjoy the end of Caskers Single Malt Week with a single malt from the land down under!

Sweet, floral aroma which leads to notes of dried fruits, plums and rich oily malt. Finish has hints of vanilla, toffee and smoke.