Learn more
Size750mL Proof122.4 (61.2% ABV) *Please note that the ABV of this bottle may vary
John E. Fitzgerald Larceny Barrel Proof is an award-winning small batch wheated bourbon released three times a year by the Heaven Hill Distillery. It is a blend of six- to eight-year-old whiskies, taken uncut and straight from the barrel. This release was bottled in September 2020 at 122.4 proof.
Notify me when this product is back in stock. 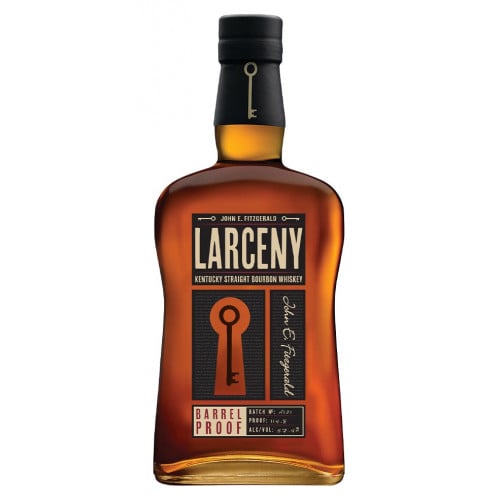 The story of Larceny whiskey starts with the legend of a man with good taste. John E. Fitzgerald was a bonded treasury agent, which gave him access to the rick houses, where Bourbon barrels were stored and aged. He would use his privileges to steal Bourbon from the best barrels, and take jugs of it home. When it came time to dump the barrels, some were found to be unusually light — and exceptionally smooth. These barrels became known as ‘Fitzgerald Barrels.’ Today, the spirit of John E. Fitzgerald lives on in the form of award-winning wheated bourbons produced by Heaven Hill Distillery: Larceny Small Batch, Larceny Barrel Proof, and Old Fitzgerald Bottled-in-Bond. Heaven Hill, headquartered in Bardstown, Kentucky, is the largest family-owned and operated whiskey distillery in America. Heaven Hill has been pursuing quality and keeping the legacy alive since 1935, when the first barrel was filled at the distillery. Two years earlier, Ed Shapira and his brothers invested in Heaven Hill, looking for new opportunities and responding to the growing interest in Kentucky Bourbon after Prohibition ended. Over 85 years later, the Shapira family remains committed to producing great Kentucky Bourbon.

Unlike traditional bourbon mash bills, Larceny and Old Fitzgerald use wheat as the secondary grain instead of rye. The wheat is sourced directly from local farms and gets fermented using Kentucky limestone water. Larceny has 25% more wheat than other wheated bourbons, which makes for a softer, rounder sipping experience.

Larceny Barrel Proof is the distillery’s acclaimed wheated Bourbon in its purest form: non-chill filtered and bottled at full barrel proof. Released three times per year in January, May, and September, each small batch has its own distinct flavor and proof point. This bourbon is a blend of six- to eight-year-old whiskies, taken uncut and straight from the barrel – just like John E. Fitzgerald used to enjoy it. This release was bottled in September 2020 at 122.4 proof.

Aromas of toasted bread, with maple and cinnamon greet you on the nose, followed by rich molasses and notes of fig and hazelnut on the palate. Nuanced flavor fades into a lingering warm finish.