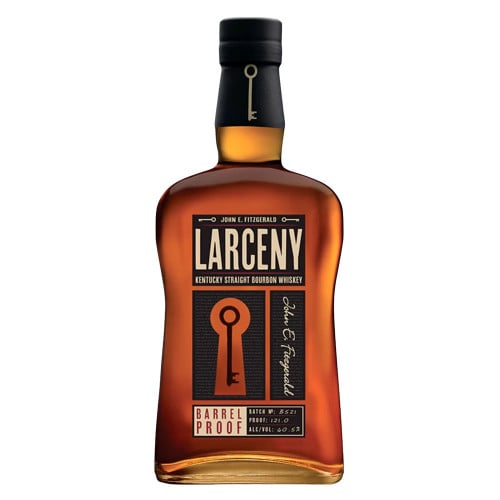 According to legend, John E. Fitzgerald founded a distillery along the banks of the Kentucky River shortly after the Civil War ended. Fitzgerald began distilling bourbon and selling it to passengers aboard the trains and steamships that passed through town. Shortly thereafter, Fitzgerald sold his brand "Old Fitzgerald Bourbon" to Julian P. "Pappy" Van Winkle for $10,000, a small fortune at the time. Pappy moved the production of Old Fitz to his distillery, where it became one of the most famous bourbons in the world.

The extremely successful Larceny Kentucky Straight Bourbon was launched in 2012 by Heaven Hill Distillery and pays homage to both John E. Fitzgerald's superb taste and the legacy of the Old Fitzgerald brand. Its big brother — the small batch barrel proof version — is released thrice per year and bottled at (varying) barrel proof with no chill filtering. True to the tradition of Old Fitz, this wheated bourbon replaces rye with wheat and features a mash bill of 68% corn, 20% wheat, and 12% malted barley. As a result, Larceny Bourbon has a sweeter, softer, and rounder flavor profile compared to bourbons that use rye as their secondary grain. Aged between 6 and 8 years, batch B521 is bottled at 121 proof.

The nose has caramel, dried fruit, charred oak, citrus, and nutty aromas. On the palate, you'll find dark fruit, oak, spice, and cereal. The finish is oaky with caramelized sugar, a touch of citrus, vanilla, and almonds.