Learn more
Size750mL Proof122.2 (61.1%ABV) *Please note that the ABV of this bottle may vary
Aged 6 to 8 years, Larceny Kentucky Straight Bourbon substitutes rye from the mash bill with wheat. The resulting flavor profile is sweeter, softer, and rounder compared to bourbons that use rye as their secondary grain.
Notify me when this product is back in stock. 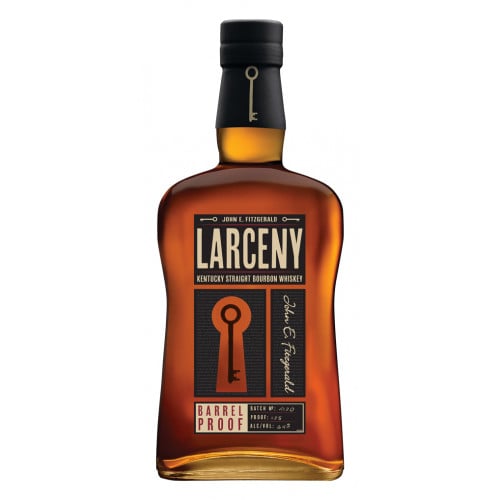 The extremely successful Larceny Kentucky Straight Bourbon was launched in 2012 by Heaven Hill Distillery and pays homage to both John E. Fitzgerald's superb taste and the legacy of the Old Fitzgerald brand. Its big brother — the small batch barrel proof version — will be released thrice per year and bottled at (varying) barrel proof with no chill filtering. True to the tradition of Old Fitz, this wheated bourbon replaces rye with wheat and features a mash bill of 68% corn, 20% wheat, and 12% malted barley. As a result, Larceny Bourbon has a sweeter, softer, and rounder flavor profile compared to bourbons that use rye as their secondary grain. The resulting bourbon has bready notes, molasses, fig, maple, dark sugar, hazelnut, and light cinnamon, along with a hint of oak and spice that provides for a subtle edge that finishes with a prolonged warmth. Each batch is planned to have bourbon aged 6 to 8 years.

This bourbon has bready notes, molasses, fig, maple, dark sugar, hazelnut, and light cinnamon, along with a hint of oak and spice that provides for a subtle edge that finishes with a prolonged warmth.