Learn more
Size750mL Proof80 (40% ABV)
Millet is a prized grain in Asia and Africa, and Nepal. This incredibly unique whiskey is the first whiskey to be made out of it. 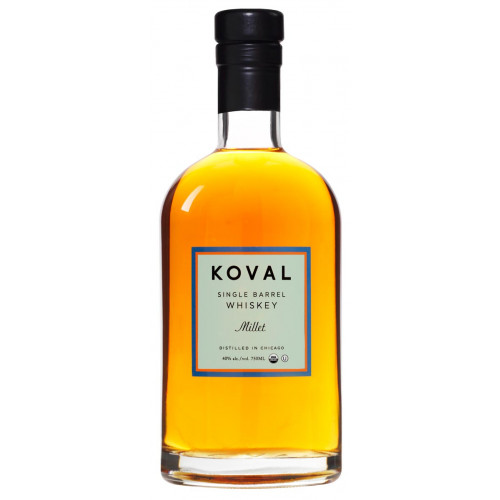 Koval distillery is a grain-to-bottle operation, sourcing their grains from a local organic farmer collective in the Midwest. The grain is milled and mashed on-site, and the resultant liquid is distilled, with only the heart cut making it into the bottle. All enzymes and yeast used in production are non-GMO, and the water is sourced from Lake Michigan, purified using a natural charcoal method. All Koval spirits are bottled and packaged on-site.

Millet is a prized grain in Asia and Africa. It is also a very popular base for spirits in Nepal. This Koval Single Barrel whiskey however, is the first whiskey to be made out of the grain. With notes of nut and vanilla to define the palate, this organic whiskey has a clean and bright finish.

Vanilla, smoke, star anise, and licorice on the nose. On the palate are vanilla and honey flavors, slightly floral notes, licorice/anise, clove, caramel, all spice, and millet grain. The finish has a slight burn, with a medium smoky dryness.