Size750mL Proof94 (47% ABV)
This beautiful, small batch, organic gin is bottled and packaged on-site, in a brightly colored, argyle bottle that won a Gold Medal at the 2016 Los Angeles International Spirits Competition.
Notify me when this product is back in stock. 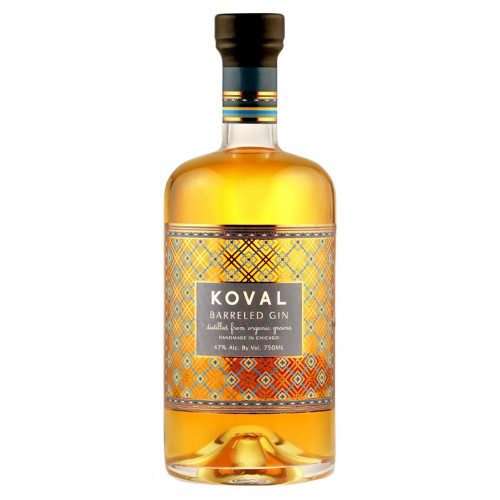 Koval, meaning “blacksmith,” in numerous European languages, or “black sheep” in Yiddish, is one of America’s premier small batch, independent spirit manufacturers. Koval is named after founder Sonat's great-grandfather, who earned Koval the nicknam when, at the very early age of 17 he emigrated from Vienna to Chicago at the start of the 1900s, to start a business. Robert was bequeathed a treasure trove of distilling knowledge and expertise from his grandfather, Robert Schimd.

Koval distillery is a grain-to-bottle operation, sourcing their grains from a local organic farmer collective in the Midwest. The grain is milled and mashed on-site, and the resultant liquid is distilled, with only the heart cut making it into the bottle. All enzymes and yeast used in production are non-GMO, and the water is sourced from Lake Michigan, purified using a natural charcoal method. This Koval Barreled Gin is bottled and packaged on-site, in a beautiful, brightly colored, argyle bottle- a design that won a Gold Medal at the 2016 Los Angeles International Spirits Competition.

Crafted in the same manner as Koval Dry Gin, with flavors from rose hip, juniper, angelica root, and coriander, Koval Barreled Gin adds a new element of depth and oak from its beauty rest Koval’s whiskey barrels, yielding a new level of citrus and spice with a light butterscotch sweetness that appeals to gin and whiskey drinkers alike. A perfect marriage of botanicals and oak that’s crisp enough to be enjoyed straight, or as a new layer of depth in your classic cocktail.

Pick up a bottle of this beautiful gin today!

Florals and juniper with a just a hint of honey on the nose. The palate is crisp, a hybrid between whiskey and gin, with vanilla and caramel gently shining through the juniper notes. The finish is long and bursting with wood spice and nutmeg.