Learn more
Size750mL Proof90 (45% ABV) *Please note that the ABV of this bottle may vary
This old-school gin is the first-ever to use Paraguayan stevia, which lends the gin a silky texture and signature sweetness.
Notify me when this product is back in stock. 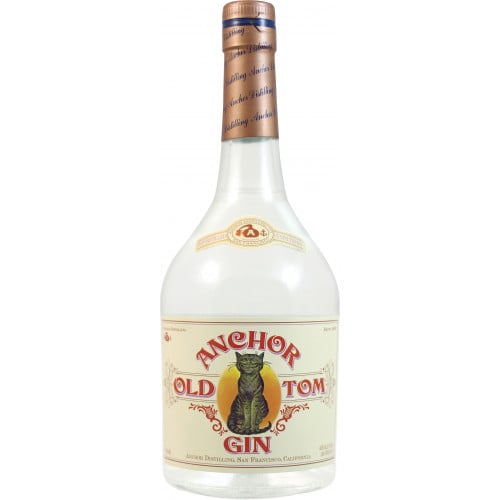 Old Tom Gin, which peaked in popularity sometime in the late 19th century (before London Dry Gin came into favor), is known for being fuller-bodied and slightly sweeter than its more modern counterpart. Anchor Old Tom Gin stays true to this stylistic tradition, and is pot distilled with juniper berries, licorice root and star anise. In addition, Anchor uses one final, relatively obscure ingredient — Paraguayan stevia — which lends the gin its silky-smooth character and pleasant sweetness.

Anchor Old Tom Gin has a woodsy aroma of clay and star anise, which morphs into sweeter notes of pear, vanilla and cinnamon candy on the palate. The finish is long and complex, with licorice notes dominating amongst other hints of smoke and savory herbs.

This brand-new gin won a Silver Medal at the WSWA Tasting Competition 2015 — pick up a bottle today!

Tucked away in a warehouse near Potrero Hill in San Francisco, Anchor Brewing and Distilling Co. has been distilling alcohol by hand for 140 years. Its history can be traced back to 1849, when German brewer Gottlieb Brekle moved to San Francisco during the Gold Rush. Twenty years later, he bought a beer-and-billiards saloon and transformed it into Anchor Brewery.

Woodsy aroma of clay and star anise, which morphs into sweeter notes of pear, vanilla and cinnamon candy on the palate. Finish is long and complex, with licorice notes dominating amongst other hints of smoke and savory herbs.