Be the first to review this product
This bourbon was crafted by both Booker and Fred Noe, and at over 14 years in age, is the oldest release ever from Knob Creek.
Add to Wish List
Notify me when this product is back in stock.

In late 2001, Booker handed the tradition and responsibility of stewarding Knob Creek to his son, Fred Noe. Before passing the torch, however, Booker laid down several special barrels, which Fred patiently waited a full fourteen years before bottling. Started by Booker and carried on by Fred, as is the case with the entire Knob Creek legacy, Knob Creek 2001 Limited Edition Small Batch Kentucky Straight Bourbon Whiskey is the oldest whiskey ever released by Knob Creek, and the ultimate representation of this legendary father-and-son duo.

“Dad knew exactly what he wanted when it came to making whiskey, and I know [this] release would make him proud.”

Knob Creek 2001 Limited Edition Small Batch Kentucky Straight Bourbon Whiskey has a golden amber color and aromas of charred oak, vanilla, caramel and cooking spices. The palate is perfectly balanced between sweet and spicy, with notes of cream and nutmeg leading to a warm, complex finish.

Only 12,000 bottles will ever be released — make sure to pick up yours today!

Golden amber color and aromas of charred oak, vanilla, caramel and cooking spices. The palate is perfectly balanced between sweet and spicy, with notes of cream and nutmeg leading to a warm, complex finish. 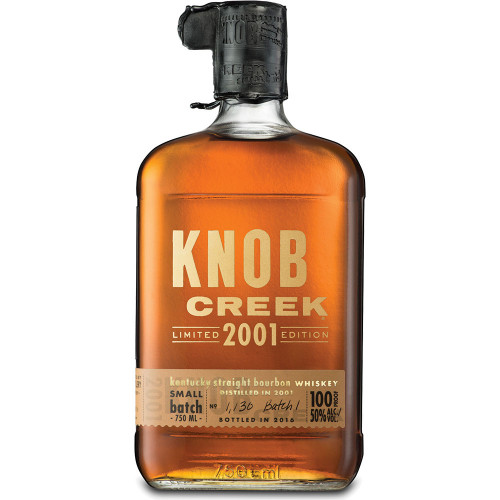