Size750mL Proof80 (40% ABV)
Aged for twelve years in American oak casks, this Dominican rum earned a score of 95 points from Wine Enthusiast, which called it one of the Top 50 Spirits. 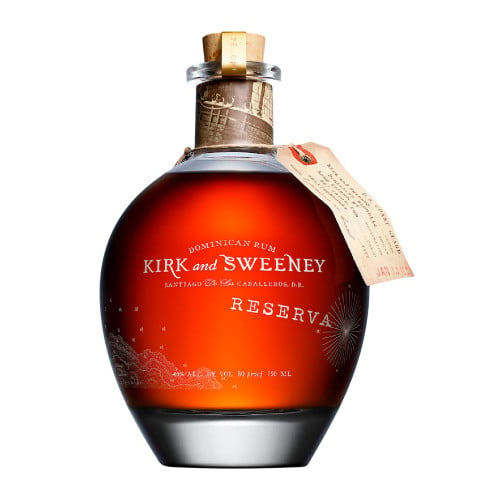 About Kirk and Sweeney Reserva Rum

"Kirk and Sweeney was the name of a wooden schooner that was best known for smuggling rum from the Caribbean to the United States during Prohibition," says August Sebastiani, President of 35 Maple Street Distillery. Just before it entered the territorial waters of the United States, the schooner would drop anchor and sell the rum to smaller boats which would come up alongside the Kirk and Sweeney. The smaller boats, which were faster and more maneuverable than the boats in the Coast Guard's fleet, would smuggle the rum ashore.

Kirk and Sweeney 12 Year Old Rum is a rum crafted in the Dominican Republic from raw sugarcane. After being distilled, the rum is aged for twelve years in American oak casks. As a result, it has deep mahogany color along with an aroma of earthy sugar cane and vanilla. The initial flavors of sweet nectar and honey give way to notes of oak and toffee. The finish, which is bold and ripe, ends with a smooth vanilla kick.

"Playing off the concept of global navigation," says Sebastiani, "we silkscreened an antique nautical map of the main rum smuggling route around the circumference of the bottle"of Kirk and Sweeney Rum. In addition, the neck of the bottle is hand-numbered with the rum's batch and bottle number, while a photo of the Kirk and Sweeney and the bottle's safety seal are printed to look like authentic nautical brass. "The overall design serves as a reminder of the risk so many were willing to take for a good taste of rum during the 1920s," says Sebastiani.

Kirk and Sweeney 12 Year Old Rum earned a score of 95 points from Wine Enthusiast, which named it one of the Top 50 Spirits of 2013, and was called one of the Best New Rums of 2013 by Liquor.com.

Pick up this incredible bottle of rum today!

Aroma of earthy sugar cane and vanilla. The initial flavors of sweet nectar and honey give way to notes of oak and toffee. The finish, which is bold and ripe, ends with a smooth vanilla kick.