Size200 mL Proof90 (45% ABV)
Kings County Bourbon has an endless list of accolades, including a Double Gold medal at the San Francisco World Spirits Competition, 2019, and 89 Points in Jim Murray’s 2013 Whisky Bible.
Notify me when this product is back in stock. 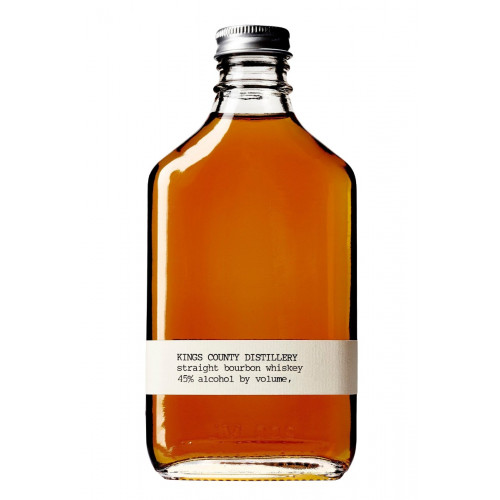 Kings County Bourbon is made from a mash bill of New York State-grown corn and malted English barley. Twice distilled on Scottish copper pot stills it's then aged for at least two years in new oak barrels. Smooth, spicy, and complex, this bourbon is a precocious whiskey, surprisingly robust for its age with notes of cinnamon, nutmeg, black pepper, and vanilla. Awarded three stars by the New York Times, and a double gold medal from the SF World Spirits Competition in 2019.

Kings County currently produces about 150 gallons of bourbon a month. "We make enough to supply some of Brooklyn, some of Manhattan and that's about it," Spoelman says. After visiting their distillery, we bamboozled them into sharing some of their juice with the rest of the country. The bottles are filled, labeled and sealed by hand.

Pick up a bottle of Kings County bourbon today!

A rich aroma of fresh corn, balanced with the sweet caramelized oak sap from small barrels. It has a very strong sweet base with flavors of vanilla and caramel, a deep molasses taste to the middle notes, and leaves a smooth finish with hints of cinnamon and autumn spices.