Be the first to review this product
This expression marks an important occasion for Kings County and craft distilleries in general. The single barrel has spent 7 years in a greenhouse-like aging room, resulting in a mature and oaky bourbon with classic barrel, spice, toffee, and peanut notes.
$227.99
Add to Wish List

Kings County Single Barrel 7 Year Old was distilled in 2013 and matured in a greenhouse-like aging room at the distillery. It marks an important milestone for the craft distillery, being the oldest age-statement single-barrel expression at the time of its release. Its extended aging means that 34% of the barrel (no. 1198) was lost to evaporation. Bottled at 107 proof, it features a traditional bourbon profile with barrel, spice, toffee, and peanut notes. It has won a Gold Medal at the 2021 edition of the San Francisco World Spirits Competition.

Get your bottle of this super-limited whiskey today!

The nose opens with oak, citrus zest, and spice notes of cinnamon and clove. On the palate, you'll find toffee, chocolate, toasted oak, and a touch of peanuts, culminating in a long and slightly prickly finish.

This product is available in:   NY 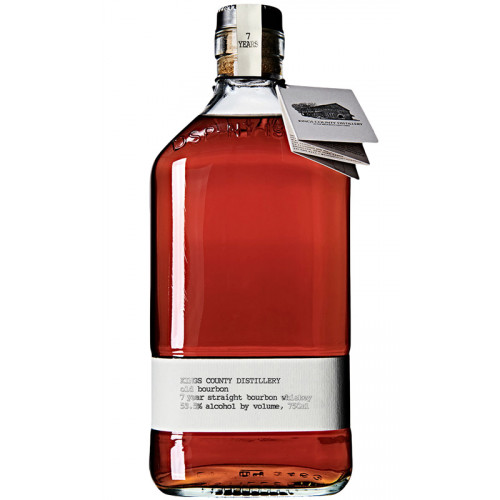