Learn more
Size750mL Proof90 (45% ABV)
A memorable and flavorful Empire Rye expression, this spectacular whiskey delights with a buttery balance of savory and sweet flavors. Gold medal and an Innovation Award at the 2020 American Craft Spirits Association Awards.
Notify me when this product is back in stock. 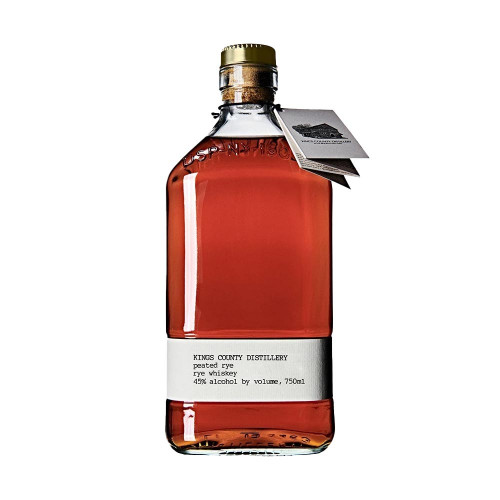 Kings County Peated Rye Batch 3 is crafted from 80% New York Danko rye and 20% Scottish peated malted barley, which sends this rye whiskey into new, strange, and beautiful territories. Aged for 2 years in new American oak barrels, this spectacular and unique expression qualifies as an Empire Rye and brings the same rich spice along with a buttery balance of savory and sweet flavors. Bottled at 90 proof, this memorable rye brings you notes of cinnamon, nutmeg, maple, and mint with a finish of warm bread and holiday spice.

The nose greets with mature oak, allspice, and maple. A buttery palate that balances savory and sweet flavors of peppered jerky, cinnamon, clove, raisin, and rich spice. The finish is smooth and warm with notes of warm bread and allspice.