This product is available in: CT, FL, NY Unfortunately, we can't ship to PO Boxes and APO addresses.

This product is available in: CT, FL, NY Unfortunately, we can't ship to PO Boxes and APO addresses. 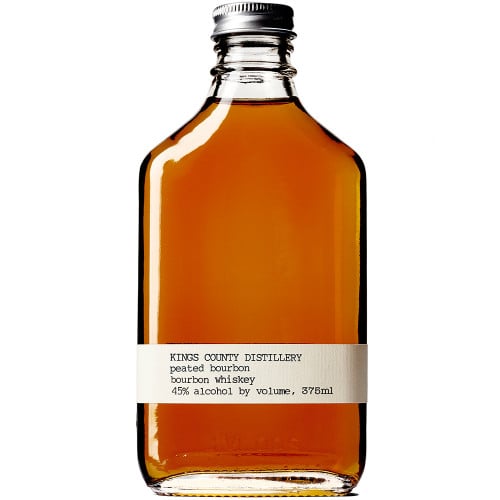 After milling and mashing the grains, the wash is slowly fermented at their distillery in blue tanks that resemble oil drums and then double-pot distilled. Haskell and Spoelman use the first alcohol produced from each batch — the "head" — as a disinfectant and sell the used mash to a pig farmer who uses it as feed. "I still don't understand why it doesn't make the pigs drunk," Haskell says.

What is Peated Bourbon? It’s bourbon whiskey that conforms to the American requirements for bourbon but it incorporates malted barley that has been smoked with peat, a tradition common to some Scotch whiskeys. Made from 75% organic New York State corn, and 25% Scottish peated malt. Peated bourbon will definitely appeal to the adventurous whiskey traveler who has had a whiskey or two in their life.

Aged for two summers (14 to 24 months) in a five-gallon charred, new oak barrels, Kings County Peated Bourbon Whiskey has an aroma of bonfire and juicy corn, which leads to notes of buttered toast, raisins and caramel on the palate. The finish is slightly smoky with hints of biscuits and more sweet corn.

Supplies of this peated bourbon are limited, so make sure to pick up a bottle today!

Kings County Distiller Peated Bourbon is a scotch-like bourbon, flavorful and robust from having aged in a new barrel, with an added light smoky finish reminiscent of single-malt. If scotch and bourbon had a baby, this is what it would taste like.