Learn more
Size1000mL Proof80 (40% ABV) *Please note that the ABV of this bottle may vary
Take a journey through familiar and less-threaded ground with this gift pack of five Kings County whiskeys that includes 200ml bottles of Moonshine, Straight Bourbon, Peated Bourbon, Chocolate Whiskey, and Spiced Whiskey. All of them are lovingly crafted at New York's premier craft distillery.
Notify me when this product is back in stock. 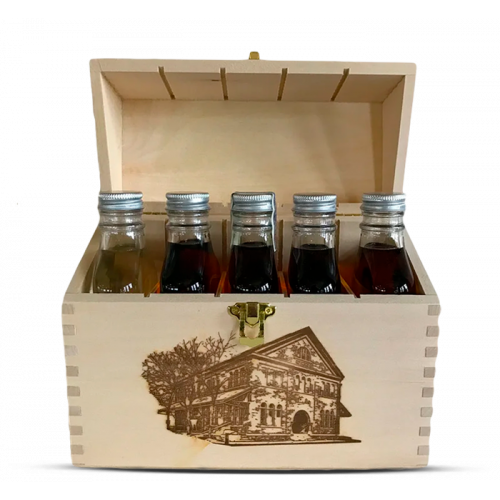 This gift set contains five King County expressions, the 200ml bottles tucked neatly into a wooden box. You'll find their Moonshine, Straight Bourbon, Peated Bourbon, Chocolate Bourbon, and Spiced Whiskey inside. The set takes you on a true journey through New York's premier craft distillery, starting with the unaged and bright Moonshine, going over more familiar ground with the Straight Bourbon, continuing with the Peated Bourbon that employs Scottish peated malt, and ending with the experimental Chocolate whiskey, infused with ground cacao husks, and the seasonal Spiced Whiskey.

Straight Bourbon: A rich aroma of fresh corn, balanced with the sweet caramelized oak sap from small barrels. It has a very strong sweet base with flavors of vanilla and caramel, a deep molasses taste to the middle notes, and leaves a smooth finish with hints of cinnamon and autumn spices.

Peated Bourbon: Kings County Distiller Peated Bourbon is a scotch-like bourbon, flavorful and robust from having aged in a new barrel, with an added light smoky finish reminiscent of single-malt. If scotch and bourbon had a baby, this is what it would taste like.

Chocolate Whiskey: Kings County Distillery Chocolate Whiskey is bitter and surprising. This rich whiskey tastes like dark chocolate and works well in cocktails or on its own as a digestif or dessert whiskey.