Learn more
Size750mL ProofVarious *Please note that the ABV of this bottle may vary
This Kings County Bourbon Gift Set is the perfect Father’s Day treat, including 3 award-winning vials of King’s County bottles of Straight, Bottled in Bond, and Peated Bourbons.
Notify me when this product is back in stock. 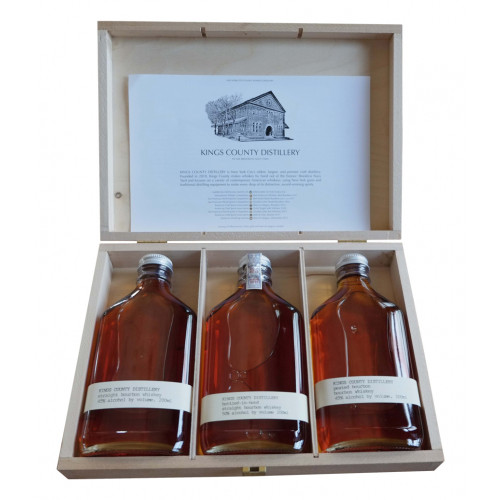 Haskell and Spoelman use the first alcohol produced from each batch — the "head" — as a disinfectant and sell the used mash to a pig farmer who uses it as feed. "I still don't understand why it doesn't make the pigs drunk," Haskell says. This Kings County Bourbon Gift Set is the perfect Father’s Day treat. The wooden gift set includes 3 award-winning 200ml vials of King’s County bottles of Straight Bourbon, Bottled in Bond Bourbon, and Peated Bourbon.

Kings County Straight Bourbon is made from 80% New York organic corn and 20% English barley and is twice distilled on Scottish copper pot stills and then aged for at least two years in charred 10 and 15 gallon oak barrels. Smooth, spicy, and complex, this bourbon is a precocious whiskey, surprisingly robust for its age with notes of cinnamon, nutmeg, black pepper, and vanilla. Awarded three stars by the New York Times, a double gold medal from the SF World Sprits Competition in 2019 and rated 89 (excellent) in Jim Murray’s 2013 Whisky Bible.

King’s County Peated Bourbon is made with malted barley that has been exposed to peat smoke. This first-of-its-kind bourbon is made from 75% organic New York State corn, and 25% Scottish peated malt. Aged for two summers (14 to 24 months) in a five-gallon, charred, new oak barrels, this unique hybrid whiskey has an aroma of bonfire and juicy corn, which leads to notes of buttered toast, raisins and caramel on the palate. The finish is slightly smoky with hints of biscuits and more sweet corn. If scotch and bourbon had a baby, this is what it would taste like. Touted as the world’s first ever peated bourbon this expression will appeal to the adventurous whiskey traveler who has tried everything. Awarded Double-Gold and Gold at the 2016 & 2017 San Francisco World Spirits Competitions, and rated 94 (Superstar whiskies that all give us a reason to live) in Jim Murray’s Whisky Bible, 2017.

Bottled-in-Bond is a designation that refers to American whiskeys (and some brandies) that are distilled, aged, and bottled entirely at one distillery, from barrels filled in one season, by one distiller. Furthermore, the whiskey must be four years old and bottled at precisely 100 proof. Kings County Bottled-in-bond earned Best-in-Category (Small Batch Bourbon under 5 years), double-gold (2017), and silver (2018 & 2019) at the San Francisco World Spirits Competition. It was also voted Best American Whisky, Best Bourbon, Best Small Batch Bourbon, Best Bourbon 4+ Years, gold 2017 at the International Whisky Competition. Gold at the 2019 ADI as well as gold at the 2019 ACSA.

Pick up your gift set today!

Straight Bourbon: Kings County Distillery Straight Bourbon Whiskey is characterized by a rich aroma of fresh corn, balanced with the sweet caramelized oak sap from small barrels. It has a very strong sweet base with flavors of vanilla and caramel, a deep molasses taste to the middle notes, and leaves a smooth finish with hints of cinnamon and autumn spices. Aged for at least two years, this bourbon is a precocious whiskey, surprisingly robust for its age. Bottled-in-Bond: Notes of fruits, pear and butterscotch on the nose, the palate is high octane with notes of toffee, baking spice, and chocolate followed by a rich smooth finish. Peated Bourbon: Kings County Distiller Peated Bourbon is a scotch-like bourbon, flavorful and robust from having aged in a new barrel, with an added light smoky finish reminiscent of single-malt. If scotch and bourbon had a baby, this is what it would taste like.