Size750mL Proof109.6 (64.8% ABV)
Crafted with 80% New York corn and 20% English malt, only 269 bottles of this 7-year-old bourbon were produced. Bottled at 129.6 proof, this is a unique limited-edition expression that showcases the Kings County pot-still style beautifully.
Notify me when this product is back in stock. 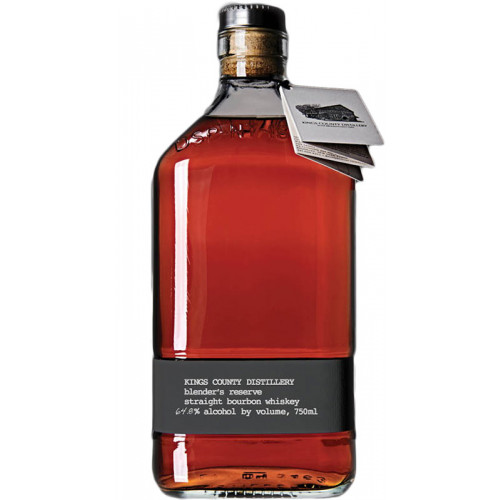 Situated along the banks of the East River, Kings County Distillery is New York City's oldest operating whiskey distillery and the first distillery in New York City since Prohibition. Wedged between Williamsburg and Vinegar Hill, Colin Spoelman and David Haskell, the master distillers at Kings County, make hand-crafted bourbon and moonshine out of the century-old Paymaster Building at the Brooklyn Navy Yard.

The Blender's Reserve expression is a limited-edition release with a total of only 269 bottles produced. It was distilled from 80% New York corn and 20% English malt. The expression came to be when they noticed that they had a 7-year-old bourbon in each of their cask sizes in their inventory. They proceeded to draw the spirit from 5 barrels. The resulting bourbon is aged 7 years and bottled at 129.6 proof and features an oaky and fruity profile with vanilla, malt, chocolate, tobacco, and spice notes.

Grab one of only 269 bottles of this bourbon today!

Oak leads the charge on the nose with vanilla, fruit, and vanilla aromas following. The palate is rich with berry, caramel, chocolate, leather, vanilla, and baking spices. The finish is oaky with a touch of heat.