Learn more
Size375mL ProofBourbon: 90 Proof (45% ABV) - Moonshine and Chocolate Whiskey: 80 Proof (40% ABV) *Please note that the ABV of this bottle may vary
Each of these bottles of Kings County Whiskey is personally signed by Kings County's master distiller.
Notify me when this product is back in stock. 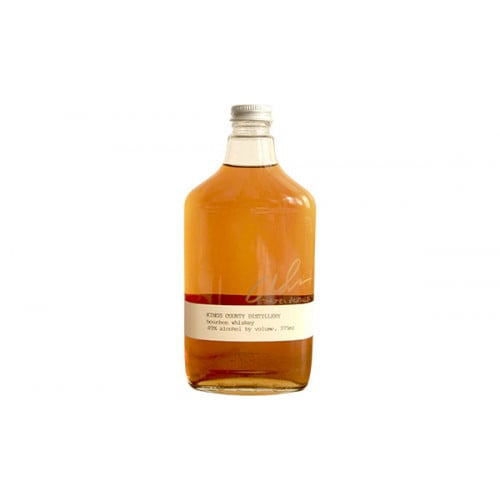 Skip to the beginning of the images gallery
Autographed Bottle

Situated along the banks of the East River in the Brooklyn Navy Yard, Kings County Distillery is New York City's oldest operating whiskey distillery and the first distillery in New York City since Prohibition. There, KC's founders — Colin Spoelman and David Haskell — hand-craft moonshine, bourbon and chocolate whiskey. "Having grown up in a dry county in Kentucky, I've always been fascinated with moonshine and spirits," says Spoelman. "I bought a plastic milkjug of illegal moonshine on a trip home once, and that really sparked my curiosity about distilling spirits. It ended up with me buying a small hobby still that we still use at Kings County."

In addition to Spoelman's hobby still, a typewriter that Haskell found on a sidewalk in Williamsburg is used to make the labels that adorn Kings County's clear, flask-shaped bottles, while a hairdryer (made by Revlon) is used to afix each bottle seal. Handwritten scrawls on a chalkboard keep track of different batches, and mesh laundry bags are used as strainers.

Kings County Moonshine Corn Whiskey is made from a mash of 80% organic, cracked corn that Spoelman and Haskell source from the Finger Lakes region in upstate New York, along with 20% Scottish malted barley. The grains are milled and mashed at the distillery before being fermented in wooden fermentation tanks built in Brooklyn. Following distillation, the moonshine is bottled at 80 proof. It has an aroma of sweet corn that is complemented by notes of pepper, roasted nuts and warm vanilla. The moonshine earned a score of 92 points from Jim Murray's Whisky Bible in 2013.

Kings County Bourbon is made from a mash of 70% organic, cracked corn, together with 30% Scottish malted barley. After fermentation, the grains are distilled through the distillery's copper gooseneck stills, which were manufactured in Scotland. Then, the bourbon is aged in five-gallon, charred American oak barrels for a minimum of twelve months. It has an aroma of vanilla and honey, which gives way to notes of clove and barley. The finish is smooth, with a sweet touch of caramel and honey. The bourbon earned the Silver Medal at the American Distilling Institute Competition in 2013.

Kings County Chocolate Whiskey is made by steeping Kings County Moonshine in artisan cacao husks sourced from the Mast Brothers Chocolate Factory in Brooklyn. The chocolate and moonshine rest together for just over a month, giving the moonshine a deep mahogany color and an aroma of dark chocolate. "It's good for someone who either likes whiskey or chocolate — which includes most people, I guess" says Spoelman. "There's not a whole lot else like it out there." The initial flavors of sweet corn are nicely balanced by the subtle notes of rich, bitter chocolate and give way to a smooth and slightly sweet finish.

Each of these bottles of whiskey is personally signed by Colin Spoelman, the master distiller of Kings County Distillery. Pick up a set of whiskies today!

Moonshine: Aroma of sweet corn that is balanced by notes of pepper, roasted nuts and warm vanilla on the palate.