Learn more
Size750mL Proof140 (70% ABV) *Please note that the ABV of this bottle may vary
Coming from Kings County in NYC, only 300 bottles were crafted of this 6-Year Blender's Reserve Bourbon. A highly curated, one-off blend of some of Kings County oldest bourbon barrels, it's bottled at cask proof of 140 proof.
Notify me when this product is back in stock. 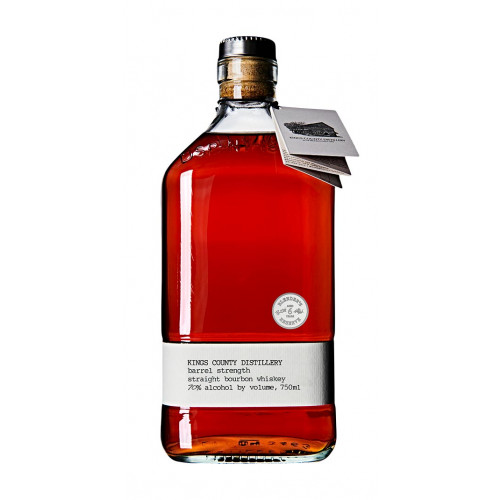 Situated along the banks of the East River, Kings County Distillery is New York City's oldest operating whiskey distillery and the first distillery in New York City since Prohibition. Wedged between Williamsburg and Vinegar Hill, Colin Spoelman and David Haskell, the master distillers at Kings County, make hand-crafted bourbon and moonshine out of the 113-year-old Paymaster Building at the Brooklyn Navy Yard.

Kings County 6-Year Blender's Reserve Bourbon is an extra-limited, highly curated, one-off blend of some of Kings County oldest bourbon barrels. Their oldest-ever release of bourbon aged in 15-gallon casks, this superb dram was aged for at least 6 years in wood barrels, resulting in an exceptionally rich, dark and dessert-like profile. Bottled at cask proof of 140 proof, it's best to open it up with a drop of water to truly appreciate the sweet, port wine notes and a maple-like texture with flavors of cherries jubilee, brown sugar, dark chocolate and fig in the background.

A sweet, dessert-forward nose with aromas of oak, cherry and maple wood with caramelized date, demerara and pipe tobacco. The palate is sweet and smooth with flavors of port, cherries jubilee, brown sugar, dark chocolate and fig. The finish is long with notes of leather and anise.