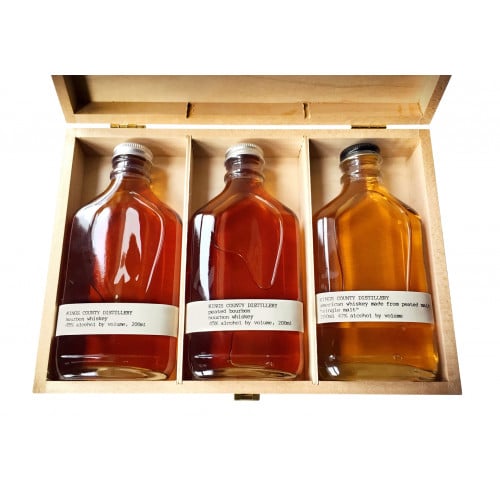 Kings County Single Malt Whiskey is just like a single malt Scotch — except it’s made in Brooklyn! The barley is sourced from England and Scotland before being malted with a touch of peat, and open-fermented. Following fermentation Kings County uses traditional Scottish pot stills to double distill the whiskey, which is then aged in their own used bourbon barrels, maturing anywhere from one and a half to four years.

Kings County Peated Bourbon Whiskey is made from a mash organic, cracked corn that Spoelman and Haskell source from the Finger Lakes region in Upstate New York, and malted barley that has been exposed to peat smoke.

Kings County Distillery’s Straight Bourbon is made from New York State organic corn and malted barley from the U.K., is twice distilled in copper pot stills and then aged in new charred oak barrels.

Kings County Bourbon Rich aroma of fresh corn, balanced with the sweet caramelized oak sap from small barrels.  It has a very strong sweet base with flavors of vanilla and caramel, a deep molasses taste to the middle notes, and leaves a smooth finish with hints of cinnamon and autumn spices.

Kings County Single Malt Whiskey Aroma of hay and peat, all the while carried by a palate of honey that leads to a finish of burnt orange peel.

Kings County Peated Bourbon Aroma of bonfire and juicy corn, which leads to notes of buttered toast, raisins and caramel on the palate. The finish is slightly smoky with hints of biscuits and more sweet corn.