Size750mL Proof92 (46% ABV)
Crafted in Taiwan, this whisky earned a score of 94 points from the Beverage Testing Institute.
Notify me when this product is back in stock. 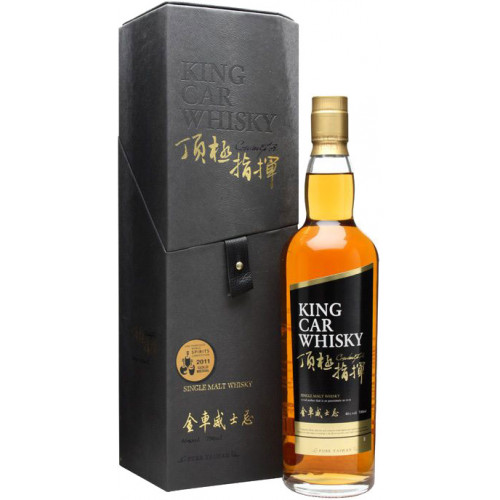 King Car Conductor Single Malt Whisky is the first whisky produced by the King Car Group that does not bear the name "Kavalan." The well-rounded and balanced whisky was crafted to reflect the diversified nature of the King Car Group, which oversees businesses in a variety of industries, including biotechnology and aquaculture.

The whisky is made entirely in Taiwan from malted barley that is imported from Scotland. Once the grains arrive in Taiwan, they are milled and mashed, before being fermented with water drawn from springs situated in the Central and Snowy Mountain ranges. This incredibly pure and quintessentially Taiwanese water source adds slightly mineral, round flavors to the whisky. Following fermentation, the wash is distilled through lantern-shaped copper-pot stills that were previously used at the Glenlivet Distillery. Due to the small size and shape of the stills, the whisky interacts with the copper, resulting in an incredibly pure and fruity flavor profile.

King Car Conductor Single Malt Whisky has an aroma of maple syrup, oatmeal and dried fruits that gives way to notes of cinnamon, cloves, woody spices, butter and dark driftwood on the palate. The finish is long and dry, with touches of apples, fragrant oak and caramel.

Aroma of maple syrup, oatmeal and dried fruits. Notes of cinnamon, cloves, woody spices, butter and dark driftwood on the palate. Finish is long and dry, with touches of apples, fragrant oak and caramel.