Size750mL Proof80 (40% ABV)
Matured in ex-bourbon and ex-sherry casks, this whisky was named one of "101 World Whiskies to Try Before You Die" and "Best New World Whisky" by Jim Murray's Whisky Bible in 2012.
Notify me when this product is back in stock. 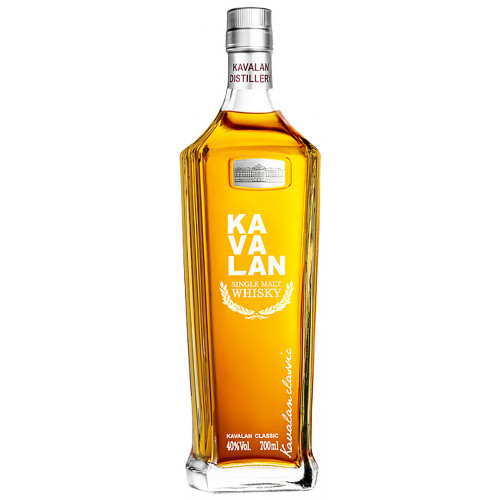 Kavalan Single Malt Whisky is crafted by the King Car Group, which was established in Taiwan in 1956. The whisky is made entirely in Taiwan from malted barley that is imported from Scotland. Once the grains arrive in Taiwan, they are milled and mashed, before being fermented with water drawn from springs situated in the Central and Snowy Mountain ranges. This incredibly pure and quintessentially Taiwanese water source adds slightly mineral, round flavors to the whisky. Following fermentation, the wash is distilled through lantern-shaped copper-pot stills that were previously used at the Glenlivet Distillery. Due to the small size and shape of the stills, the whisky interacts with the copper, resulting in an incredibly pure and fruity flavor profile.

After the whisky has been distilled, it is aged for approximately three years in a combination of American oak casks that were previously used to mature bourbon and Spanish oak casks that were previously used to mature Oloroso Sherry. This unique maturation process gives the whisky an aroma of fresh fruit (particularly pear, mango and strawberries), which gives way to notes of orchid flowers, vanilla, coconuts and milk chocolate on the palate. The finish is medium long, with a touch of oil, citrus and cloves.

Kavalan Single Malt Whisky earned the Gold Medal at the 2011 International Wine and Spirits Competition, where it was named "Best in Class." It was also named in Ian Buxton's "101 World Whiskies to Try Before You Die" and earned a score of 90 points from the Beverage Testing Institute in 2017.

Aroma of fresh fruit (particularly pear, mango and strawberries). Notes of orchid flowers, vanilla, coconuts and milk chocolate on the palate. Finish is medium long, with a touch of oil, citrus and cloves.