Size750mL Proof80 (40% ABV)
Matured in ex-bourbon and ex-port casks, this whisky earned the Silver Medal at the International Wine and Spirits Competition.
Notify me when this product is back in stock. 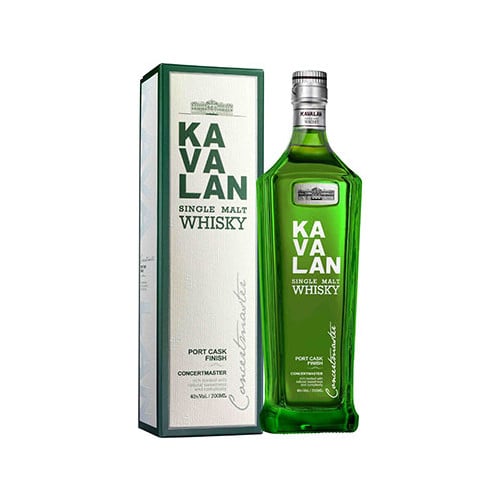 The term "Kavalan"refers to some of the earliest inhabitants of Taiwan, who settled the modern-day Yilan County during the 16th century. Legend has it that the Kavalan arrived by sea from the east and upon seeing the stunning beauty of Taiwan, decided to settle the bountiful land.

Kavalan Concertmaster Taiwanese Single Malt Whisky is crafted by the King Car Group, which was established in Taiwan in 1956. The whisky is made entirely in Taiwan from malted barley that is imported from Scotland. Once the grains arrive in Taiwan, they are milled and mashed, before being fermented with water drawn from springs situated in the Central and Snowy Mountain ranges. This incredibly pure and quintessentially Taiwanese water source adds slightly mineral, round flavors to the whisky. Following fermentation, the wash is distilled through lantern-shaped copper-pot stills that were previously used at the Glenlivet Distillery. Due to the small size and shape of the stills, the whisky interacts with the copper, resulting in an incredibly pure and fruity flavor profile.

After the whisky has been distilled, it is initially aged in American oak casks that were previously used to mature bourbon. Then, the whisky is finished in Portuguese ruby, tawny and vintage port wine casks. This secondary maturation gives the whisky a dark ruby color, along with an aroma of berries, tropical fruits, tobacco and mint. Notes of tart fruitiness, grapes, oranges, honey, almonds and nuts dominate the palate, and lead to a finish that is well-balanced and bold.

Kavalan Concertmaster Taiwanese Single Malt Whisky earned the Silver Medal at the 2011 International Wine and Spirits Competition, where it was named "Best in Class."

Dark ruby color, along with an aroma of berries, tropical fruits, tobacco and mint. Notes of tart fruitiness, grapes, oranges, honey, almonds and nuts dominate the palate. Finish that is well-balanced and bold.