Learn more
Size750mL Proof87.6 (43.8% ABV) *Please note that the ABV of this bottle may vary
It has been an incredible two centuries since John Walker began blending his whiskies. The brand celebrates with this special limited-edition bottling of the acclaimed Blue Label with an attractive design.
Notify me when this product is back in stock. 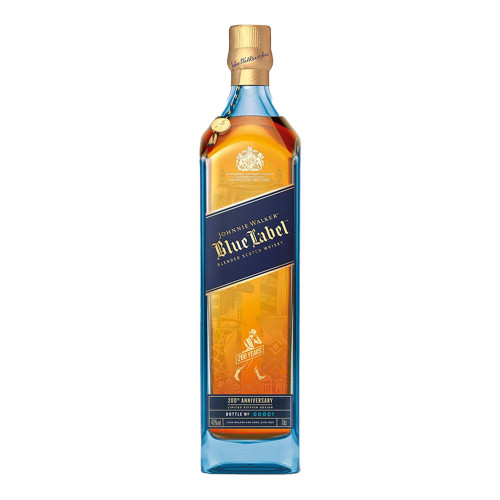 Johnnie Walker is celebrating their 200th anniversary with some very special and limited releases, such as this limited-edition Blue Label bottling with an attractive celebratory design. Only 1 in 10,000 casks from the company’s reserves of over 10 million maturing whiskies have what it takes to be blended into this masterpiece, including some extra-precious casks from long-closed "ghost" distilleries. Johnnie Walker Blue Label Blended Scotch Whisky represents the epitome of blending and the pinnacle of the House of Walker whisky ― this bottling is the perfect way to join in on the festivities.

Celebrate 2 centuries of Johnnie Walker with this amazing whisky!

The nose is fruity, with a touch of oak, spice, and vanilla. The supple and balanced palate has notes of caramel, hazelnuts, and dark chocolate. The finish is smoky, floral, warming, and extra long.