$40.99
Caskers Rewards members earn up to 2 store points back when buying this bottle.

Size750mL Proof90 (45% ABV)
This rye is crafted from field to flask at the Myer Family Farm in New York.
Notify me when this product is back in stock. 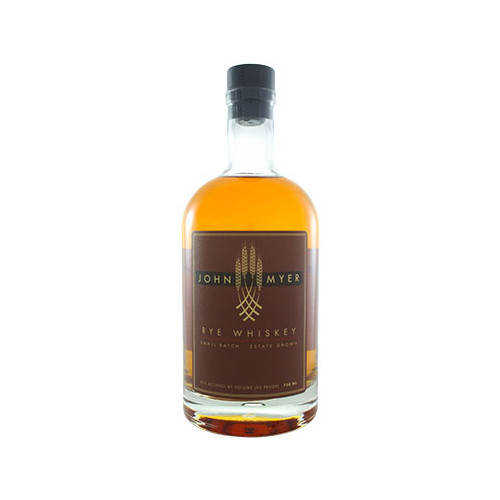 John Myer Rye Whiskey is made with a unique, four grain mashbill composed of rye, corn, wheat and barley, all of which are harvested from the Myer Family Farm. Traditionally, four-grain mashbills have been reserved for the production of bourbon, "but we wanted to produce something with a complex and different flavor profile," says Myer.

Once Myer harvests the grains, he mills and mashes them before distilling the wash through his copper-pot still. Then, the whiskey is matured for just over one year in traditional, oak casks before being bottled by hand. Myer Rye Whiskey has an aroma of citrus, orange zest, and spicy toast that gives way to notes of caramel apples, cinnamon and ginger on the palate. The finish is intense and accented by touches of tarragon, black pepper and cayenne.

"John Myer Rye Whiskey is a genuine craft product, made from field to flask right here on our farm," says Myer. Pick up a genuine rye whiskey today!

Aroma of citrus, orange zest, and spicy toast. Notes of caramel apples, cinnamon and ginger on the palate. Finish is intense and accented by touches of tarragon, black pepper and cayenne.