Size750mL Proof92 (46% ABV)
The first straight rye whiskey from New York in over 100 years, this expression is crafted with a mash bill of 95% rye and 5% malted barley. Aged at least 3 years and bottled at 92 proof, it's bold, spicy, citrusy, fruity, and bright.
Notify me when this product is back in stock. 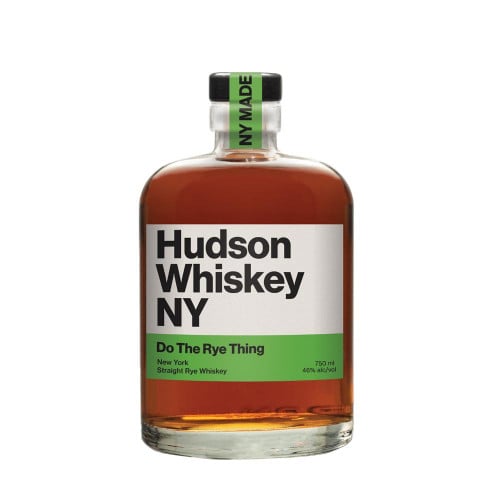 About Hudson Whiskey NY Do The Rye Thing Rye Whiskey

Tuthilltown Distillery is New York’s first legal distillery since the Prohibition era. It was established in 2003 by Ralph Erenzo and his partner Brian Lee in the old Tuthilltown Gristmill that Erenzo purchased a few years earlier with a plan to start a climbing center. They converted one of the mill granaries to a micro-distillery and brought the tradition of small-batch spirits production back to the Hudson Valley. Two and a half years later, Tuthilltown Spirits produced their first batches of vodka from scraps collected at a local apple slicing plant.

Erenzo is a true pioneer of modern-day craft distilling who not only opened the city’s first distillery, but also pushed for legislative changes that allow New York farms to establish distilleries on-site, which eventually brought on a distilling renaissance across the US. Through sustainable growth, the company reached the stage when the partners were approached by William Grant and Sons to sell the distillery. Instead, they negotiated the sale of the Hudson whiskey brand, while keeping the control over the product through the distillery, becoming the first craft brand to be picked up by a major house.

Driven by innovation, collaboration, art, and exploration, and inspired by the bright lights of Broadway, the scenic views of the majestic Hudson Valley, and the city's brilliant, creative and resilient people, the distillery turns the high-quality grain from local family farmers into award-winning whiskeys that capture the thrill that is New York. As their whiskeys quietly matured over a decade, the creative team continued to experiment with new grains, blends, and cask finishes, pushing the limits once again, and making the whiskey the way they want to: bold, yet refined, artful and unapologetic.

Do The Rye Thing is their flagship New York straight rye whiskey and the first of its kind in NY in over 100 years. Crafted with a mash bill of 95% rye and 5% malted barley from NY state farms, the expression is aged upwards of 3 years. Bottled at 92 proof, it's a kosher whiskey that is bold and spicy with citrus and honey notes culminating in a bright and minty finish.

Get your bottle of this New York rye whiskey today!

The nose opens with sweet honey, lemon zest, and grain aromas. The palate is bright with fruit notes, honey, and a touch of mint that carries on through the finish with a touch of rye spice, black pepper, citrus, and heat.