Size750mL Proof90 (45% ABV) each
These whiskies are crafted from field to flask at the Myer Family Farm in New York.
Notify me when this product is back in stock. 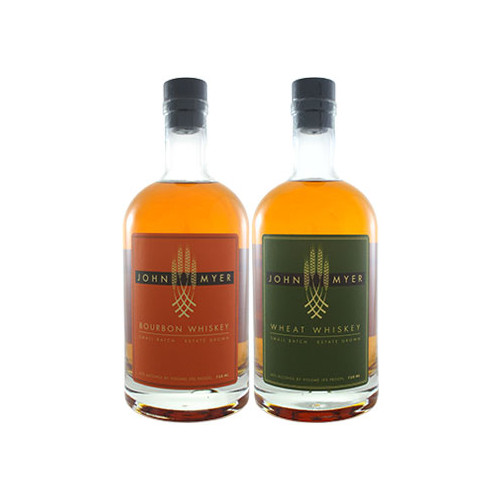 John Myer Bourbon Whiskey is made from a mash of corn, rye and malted barley harvested exclusively from the Myer Family Farm. Once Myer harvests the grains, he mills and mashes them before distilling the wash through his copper-pot still. Then, the bourbon is matured for just over one year before being bottled by hand. Myer Bourbon has an aroma of green herbs, mandarin citrus and lightly roasted corn that gives way to notes of light hops, amaretto and woody spice. The finish is smooth, with touches of leather, malt and maple syrup.

John Myer Wheat Whiskey is made entirely from a spring variety of wheat that was hand-chosen by Myer. Much as with the bourbon, the wheat grains are also harvested exclusively from the Myer Family Farm, and distilled through Myer's custom-made, copper-pot still. The wheat whiskey has notes of smoked timber, stone fruits, citrus and caramel that lead to a finish accented by butter toffee and black pepper.