Size750mL Proof86 (43% ABV)
At the very core of the John Emerald lineup is the Single Malt Whiskey which shares the name with the distillery itself. The style is between bourbon and Scotch whisky, or as they like to call it ― Alabama single malt.
Notify me when this product is back in stock. 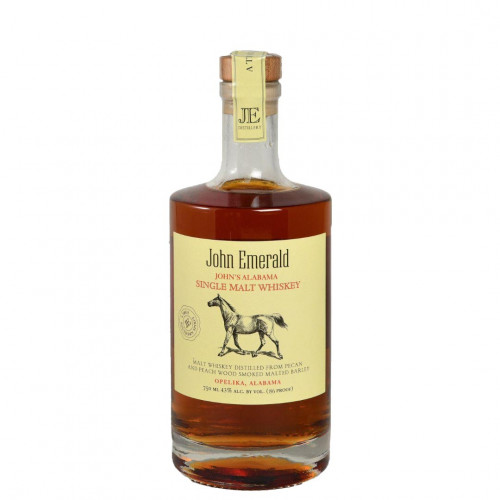 John Emerald Distilling Company is a family-run small batch craft distillery from Opelika, Alabama that has been operational since 2014. It is the first legal distillery that opened in the state since the end of the Prohibition era, a year short of a hundred years later. It all started when John and his son Jimmy Sharp, both homebrewers, started looking into opening a brewery. Finding the market to be oversaturated, they turned to craft distilling instead and started rigorous training and education. They came upon an old cotton warehouse in Opelika, a small and business-friendly town where the mayor welcomed them with open arms.

The distillery now operates on 8 thousand square feet and has a tasting room that is open for visitors. They produce several spirits using their 350-gallon hybrid pot, each product named after one of John's and Jimmy's ancestors ― their (grand) father John Emerald Sharp, a successful businessman, being the distillery's namesake. The spirits include award-winning gin, vodka, rum, and single malt.

At the very core of their lineup is the John Emerald Alabama Single Malt Whiskey, the only one to share the name with the distillery itself. The style is between bourbon and Scotch whisky, or as they like to call it ― American single malt. A part of the 100% malted barley grain recipe is smoked with peach and pecan wood, and Alabama wine barrel staves are added for a touch of smoke and added complexity. The spirit then matures in Missouri Ozark charred oak barrels in a room that simulates the changing of seasons with variable temperature.

The whiskey is smooth and sweet with notes of honey, vanilla, cinnamon, oak, and a hint of smoke that comes from peach and pecan wood chips. The wine barrel staves add fruity and citrusy notes of orange zest and peaches for a well-rounded and complex profile.