Size375mL Proof90 (45% ABV)
This brand-new bourbon, which is one of the oldest ever released under the Beam label, has an unusually high rye content.
Notify me when this product is back in stock. 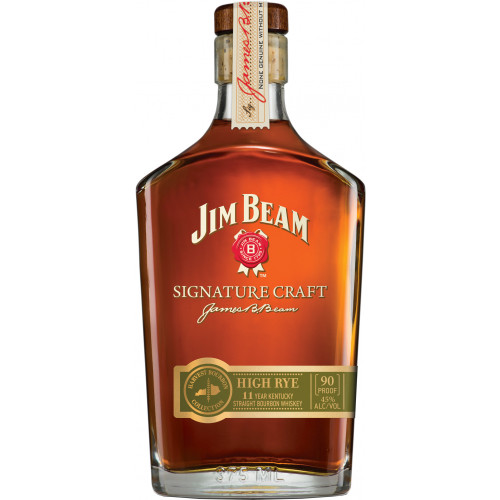 Jim Beam Signature Craft High Rye 11 Year Old Kentucky Straight Bourbon Whiskey is the latest release in Jim Beam’s Harvest Bourbon Collection. While the whiskey still contains at least 51% corn (it must in order to be called “bourbon”) and some malted barley, the mashbill has an unusually high proportion of rye grains, lending a sharp, complex spiciness to the whiskey that is mellowed by the eleven years it spent aging in new American oak casks.

As a result, Jim Beam Signature Craft High Rye 11 Year Old Kentucky Straight Bourbon Whiskey has an aroma of cinnamon, maple syrup and apple pie, which leads to a spice-driven palate filled with mint, clove, vanilla and gingerbread. The finish is wonderfully bold, with big notes of oak and rye coming together beautifully.

The Jim Beam Signature Craft Harvest Bourbon Collection represents an entirely unique approach to producing bourbon from a family that has been making it since the dawn of the American Revolution. "If you get stagnant, people are going to stop looking at you," says Noe. "Bourbon is hot all over the world. People read about this stuff, and they want it."

Aroma of cinnamon, maple syrup and apple pie, which leads to a spice-driven palate filled with mint, clove, vanilla and gingerbread. Finish is wonderfully bold, with big notes of oak and rye coming together beautifully.