Size750mL Proof100 (50% ABV)
This whiskey, which represents a new project by Master Distiller Fred Noe, was bottled in bond according to strict Federal regulations.
Notify me when this product is back in stock. 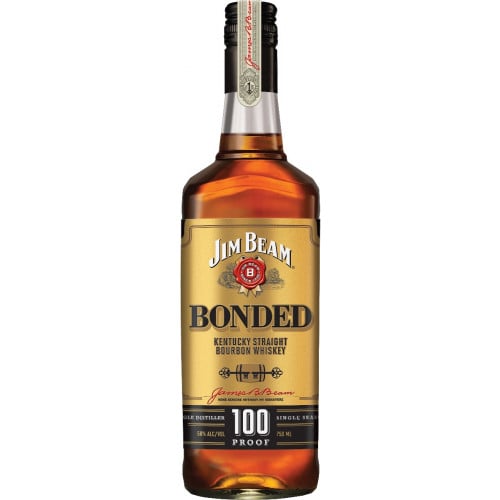 Jim Beam Bonded Whiskey is Fred Noe’s latest project, an effort to revive the somewhat lost art of “bonded” whiskey. Made according to a strict set of of Federal regulations, bonded whisky takes its name from the bonded warehouses — where bonded whiskey must be kept under lock-and-key for at least four years — and the laws that governed them. Bonded whiskey must also be bottled at 100 proof, and has to be produced during a single season at the distillery. Leading up to Prohibition, when whiskey tampering was rampant, these practices were designed to assure customers that the whiskey they were purchasing was of a certain high, unadulterated quality.

Jim Beam Bonded Whiskey has a sharp, woody aroma, with lighter notes of vanilla and caramel leading to toasted marshmallow, butterscotch candy and maple on the palate. The finish is deep and complex, with notes of tobacco and polished leather rounding out the earlier sweetness.

Sharp, woody aroma, with lighter notes of vanilla and caramel leading to toasted marshmallow, butterscotch candy and maple on the palate. Finish is deep and complex, with notes of tobacco and polished leather rounding out the earlier sweetness.