Size1L Proof80 (40% ABV)
Aged for a minimum of 36 months and, for a limited time only, signed by the master distiller, this bourbon pays homage to the legacy of Jesse James.
Notify me when this product is back in stock. 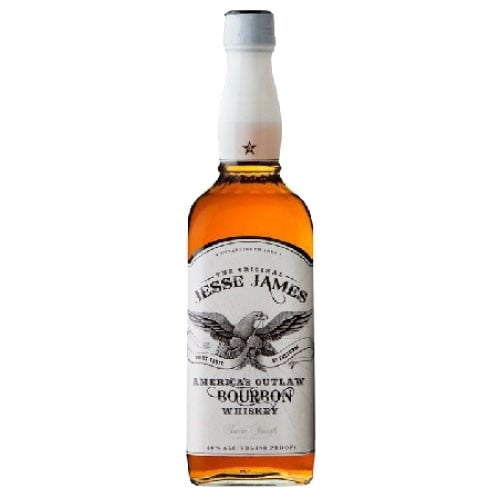 Born in the antebellum south, Jesse Woodson James is a legendary figure of the Wild West and the quintessential American outlaw. After serving in the American Civil War, James joined a gang that robbed banks, trains, and stagecoaches in Missouri, Kentucky, Iowa, Texas, Arkansas, Kansas and West Virginia. On April 3, 1882, James was preparing to depart his home with a fellow gang-member, Robert Ford. Before mounting his horse, Ford shot James in the back of the head; James' two previous bullet wounds and partially missing middle finger served to positively identify the body (Ford immediately went to the authorities to claim the bounty on James' head, but was instead arrested for robbery and first-degree murder). Following his death, James was immortalized in a number of dime-store novels and movies.

The bourbon is made from a mash American-made corn, rye and malted barley, which are mashed and fermented before being distilled in the heart of Kentucky. While bourbon must be aged for a minimum of two years in order to be called " straight' bourbon whiskey, Jesse James Bourbon Whiskey is aged for a minimum of three years under the intense, Kentucky sun, in new, American oak casks that have been charred and charcoal mellowed.

As a result of its maturation, the whisky has a copper-reddish color, along with an aroma of roasted nuts, milk chocolate, caramel and oak spices. The aroma gives way to smooth notes of sweet corn, nougat and creamy vanilla and leads to a warming finish with notes of cloves, ginger and warming spices.

The bourbon earned the Bronze Medal at the San Francisco World Spirits Competition in 2012, and for a limited time only these bottles come signed by Jesse James' master distiller. Pick up a bottle today!