Be the first to review this product
Only 1,800 cases of this limited edition bourbon, which was aged between 21 and 24 years, will ever be produced.
$1,777.99
Add to Wish List

The principal author of the Declaration of Independence and one of the greatest Founding Fathers, Thomas Jefferson was elected the third President of the United States in 1800. During his tenure, Jefferson authorized the purchase of the Louisiana Territory, dispatched Lewis and Clark westward in order to explore the remainder of the continent and repealed the Whisky Excise Tax.

After Jefferson retired from public office in 1815, he often tended to the garden that he had cultivated on his Monticello estate. At the time, it was customary for wealthy farmers, including Jefferson, to distill the excess grains they harvested from their farms into spirits (George Washington was one of the country's largest distillers of rye whiskey). As a result, each farmer's spirits were unique and reflected the local terrior of their farm. Jefferson's Presidential Select 21 Year Old Straight Bourbon Whiskey pays homage to Jefferson and the exquisite whiskey he distilled.

While most small batch bourbons are made from a blend of 200 to 300 different casks, Jefferson's 21 Year Old Bourbon was crafted from just 15 casks. Each barrel, which was made of virgin American oak that had been charred with a #3 char, was allowed to rest for a minimum of 21 years and a maximum of 24 years. "This limited release whiskey aged beautifully," says Trey Zoeller, Jefferson's founder and master blender.

As a result of its age, the bourbon has a dark honey hue, along with an aroma of vanilla, molasses, caramel and roasted nuts. The initial notes of pecan pie and orange marmalade on the palate are complemented by touches of cinnamon, black pepper, cardamom and oak. The long, elegant finish has light floral undertones along with smooth, vanilla cream notes accented by a hint of caramel. "This is precious bourbon since there are very few bottles of this age with this complexity," says Zoeller. "Because of the nuanced flavor profile, this Jefferson's Presidential Select Straight Bourbon Whiskey is sure to become one of our most coveted bottlings."

As a result of evaporation during maturation, only 1,800 cases of this limited edition, rare bourbon will ever be made.

Dark honey hue. Aroma of vanilla, molasses, caramel and roasted nuts. Initial notes of pecan pie and orange marmalade on the palate are complemented by touches of cinnamon, black pepper, cardamom and oak. Long, elegant finish has light floral undertones along with a smooth, vanilla cream flavor accented by a hint of caramel. 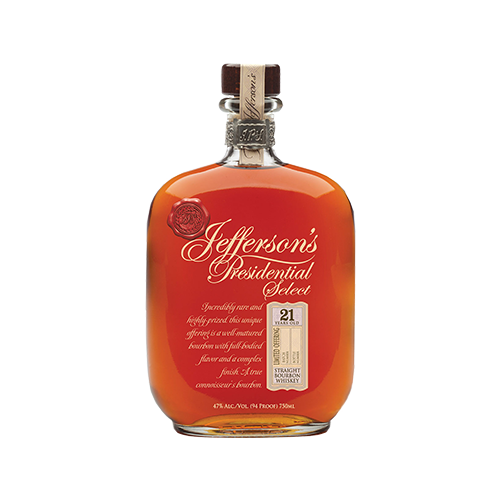