Size1000mL Proof92 (46% ABV)
Inspired by a Missouri wine cooperage, this selection features five of the 13 small batch bourbon whiskeys from Jefferson's experimental Wood series.
Notify me when this product is back in stock. 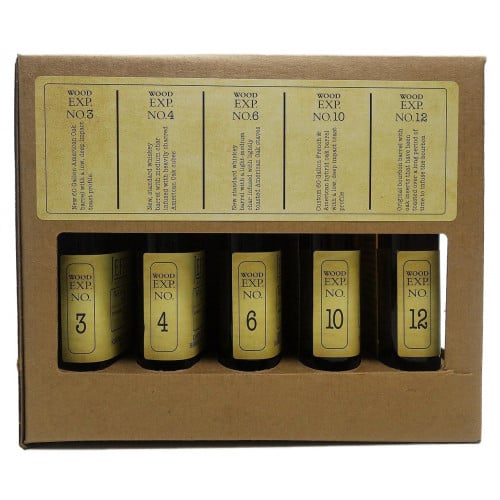 Founded in 1997, Jefferson’s is the brainchild of Trey Zoeller and his father Chet, a famed bourbon historian. Continuing a family tradition that dates as far back as the 18th century -when Trey’s 8th generation grandmother was arrested in 1799 for the “production and sales of spirituous liquors.”

Generations later, the father-son duo chose to personify the brand in the spirit of Thomas Jefferson—who was renown his curious nature and love of experimentation. Jeffersons is constantly expanding their horizons with new and innovative ways of looking at whiskey, and how it interacts with wood. At this intersection of art and experimentation, lies inspiration. The Wood Experimental Collection was inspired by an enlightening trip to a wine cooperage in Missouri.

Wine barrels are almost exclusively toasted oak, as opposed to bourbon’s charred, brand-new barrels, which yield a high-oak flavor profile. This is what inspired Trey Zoeller to embark on an experimental journey with a 4-year-old bourbon, aging it in new charred white oak barrels, and finishing it in 13 different environments/vessels.

Get your experimental collection today!

No. 3 Caramel, malt, and oak. Sweetness on the palate, with earthy notes and flavors of corn. The finish has a lingering burn with baking spices.

No. 4 Heavy oak on the nose with sweet notes of molasses. The palate has notes of fruit, leather, rich caramel, cinnamon, and spice. The finish has further spice and cinnamon notes.

No. 6 Honey and caramel, and fresh oak wood on the nose. The palate brings sweet corn, honey, caramel and oak, followed by strong tannins. A lingering spice on the finish.

No. 10 Sweet caramel, fruit, and vanilla, a touch of meat, and honeyed notes. The palate is honeyed, with flavors of dry fermented fruits, apples, and floral and earthy notes. The finish is very warm and dry.

No. 12 Cinnamon, honey, spice, and fruit, very tannin-forward. The palate is sweet and honeyed followed by cinnamon, almonds, burnt sugar, light caramel, vanilla, and a hint of tobacco. The finish is short and tart.