Be the first to review this product
This wheated bourbon was distilled in 1991 at the Stiltzel-Weller distillery, the one that brought us the mythical Pappy Van Winkle. After spending 18 years in those Stiltzel-Weller barrels, it was bottled at 94 proof for this very special Jefferson's series.
Add to Wish List
Notify me when this product is back in stock.

The principal author of the Declaration of Independence and one of the greatest Founding Fathers, Thomas Jefferson was elected the third President of the United States in 1800. During his tenure, Jefferson authorized the purchase of the Louisiana Territory, dispatched Lewis and Clark westward in order to explore the remainder of the continent, and repealed the Whisky Excise Tax.

After Jefferson retired from public office in 1815, he often tended to the garden that he had cultivated at his Monticello estate. At the time, it was customary for wealthy farmers, including Jefferson, to make their own garden spirits. Each farmer's spirits were unique and reflected their personal tastes and the local terroir of their farm. Jefferson's Reserve Very Old Straight Bourbon Whiskey is crafted by Chet and Trey Zoeller in honor of Jefferson and his experimental nature. While the Zoellers were inspired by Jefferson, their roots can be traced back for generations deep into Kentucky's bourbon history.

Jefferson's Presidential Select was distilled in 1991 at the legendary Stiltzel-Weller distillery ― the one that was built by Pappy Van Winkle ― which closed up shop that very same year. The wheated bourbon spent 18 years in those barrels before being bottled for this prestigious Jefferson's series.

Get this piece of bourbon history today!

It's a rich wheated bourbon with dried fruit notes, hints of leather, and a touch of nuttiness on the nose. Subtly sweet with toffee, fruit, vanilla, and some gentle floral notes, there's plenty of oak that is never overpowering ― it's all balanced perfectly. 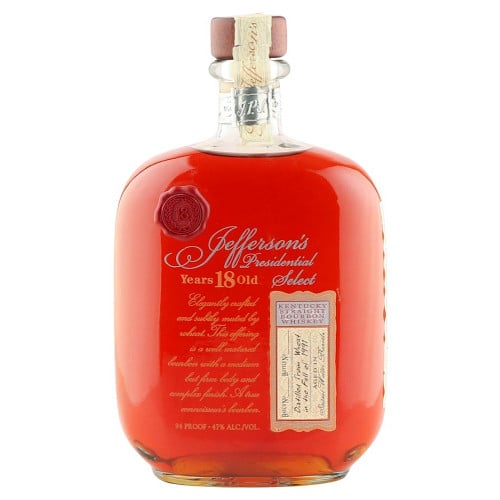