Learn more
Size750mL Proof94 (47% ABV) *Please note that the ABV of this bottle may vary
This limited offering is extremely hard to find. Crafted in the final years of the Stitzel-Weller Distillery, this high-end bourbon was aged for 17 long years.
Notify me when this product is back in stock. 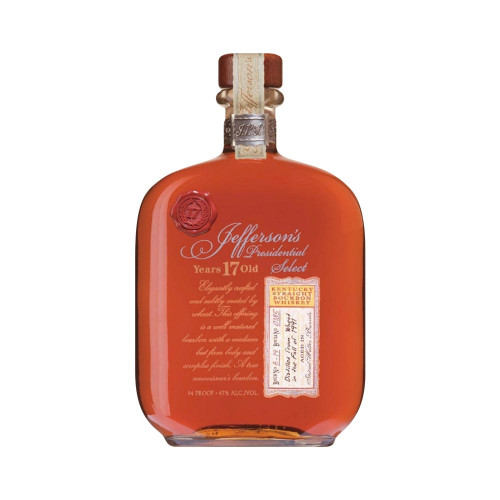 Crafted in the final years of the Stitzel-Weller Distillery before it closed down in Louisville, Jefferson's Presidential Select Bourbon 17 Year Old is a high-end bourbon that was aged for 17 long years. Made after a wheated recipe, this is a big, well-balanced, and bold bourbon that showcases a stunning harmony of flavors of raisin, sherry, and chocolate. Bottled at 94 proof, this rare and silky-smooth expression is a very limited offering that's hard to find.

The nose is big with vanilla, citrus, apple, subtle caramel, and nutty aromas. The palate is well-balanced and silky with English toffee, cinnamon, and leather flavors blending with raisin, sherry, and chocolate. The finish is long.