Size750mL Proof94 (47% ABV)
This Presidential Select Bourbon is a highly nuanced, complex spirit aged for 11 years in new American Oak, before being finished in freshly charred oak barrels.
Notify me when this product is back in stock. 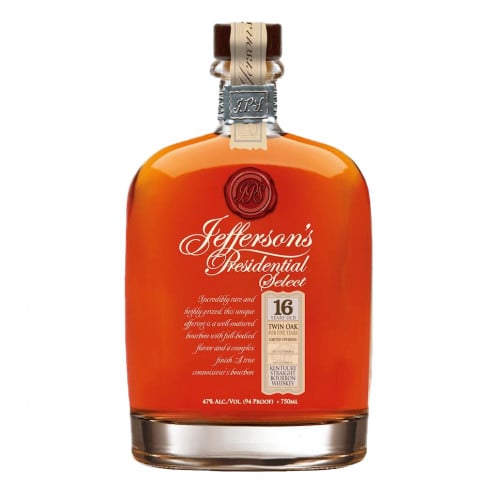 This bourbon has undergone a truly unique aging process. Starting out as straight Kentucky Bourbon whiskey, the bourbon is initially matured for 11 years in new American Oak casks. Next the bourbon is aged for an extra five years in freshly charred oak casks yielding a bright whiskey with an added depth of flavor and complexity imparted onto the spirit (from its long rest in these new barrels). Expect notes of orange spice, vanilla, tobacco and molasses on the finish.

Bright bourbon notes all throughout the nose and palate, followed by notes of orange spice, vanilla, tobacco and molasses on the finish.