Learn more
Size750mL Proof90 (45% ABV)
Made up of over 60 bourbons, the barrels for this special Voyage #17 were hand-picked by the Caskers team.

Only 144 bottles available!
Notify me when this product is back in stock. 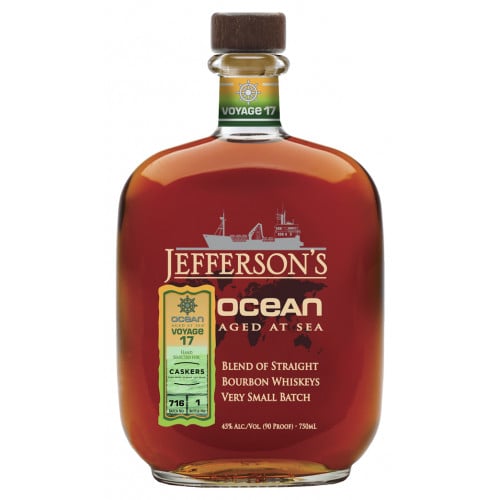 The barrels for this special Jefferson’s Ocean Aged At Sea Bourbon Whiskey Voyage #17 were handpicked by the team at Caskers. Characterized by its sweet and salty character, this whiskey is a small batch comprised of over 60 select bourbons aged between 6-8 years. These whiskeys are meticulously blended by founder and master blender Trey Zoeller before being placed in new, charred American oak casks and brought aboard a ship. These whiskeys are slowly married and infused by the wood’s flavor as the ship rolls back and forth over the water.

In addition, the temperature and barometric pressure fluctuations during the sea voyage cause the oak staves to expand and contract, allowing the bourbon to extract more of the tannins and flavor from the oak during maturation. After six months, the whiskey is returned to shore, tapped, and bottled at a robust 90 proof.

As a result of this unique maturation process, Jefferson’s Ocean Bourbon yields a classic bourbon aroma of sweet corn, vanilla, dark fruit, brown sugar, orange zest, dark honey, and oak. This then gives way to rich and scrumptious palate of dark fruits, spice, cherries, cinnamon, more vanilla, and oak with briny undertones all throughout, all tied together by a medium finish of caramel, wood, salt, and vanilla.

Bourbon aroma of sweet corn, vanilla, dark fruit, brown sugar, orange zest, dark honey, and oak. This then gives way to rich and scrumptious palate of dark fruits, spice, cherries, cinnamon, more vanilla, and oak with briny undertones all throughout, all tied together by a medium finish of caramel, wood, salt, and vanilla.