Caskers Rewards members earn up to 9 store points back when buying this bottle.
Size750mL Proof90 (45% ABV)
Thomas Jefferson was also known to be quite the wine aficionado. As America’s first ambassador to France, he fell in love with the finest wines of Bordeaux, particularly the Chateau Pichon Baron, a red wine of world class quality.
Notify me when this product is back in stock. 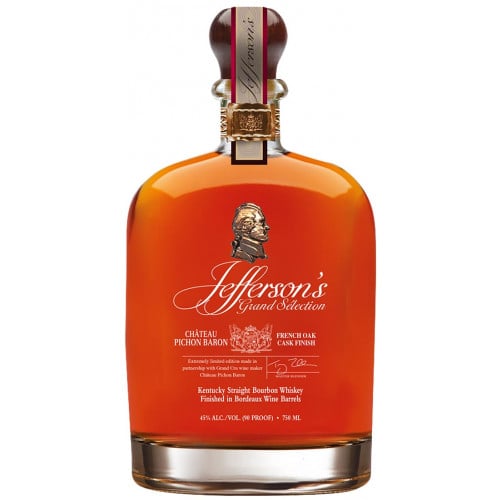 Thomas Jefferson was also known to be quite the wine aficionado. As America’s first ambassador to France, he fell in love with the finest wines Bordeaux had to offer. He became particularly enamored with the wines of the Chateau Pichon Longueville Baron vineyards, known for producing elegant, tannic forward Bordeaux wines. His true love was a particular Chateau Pichon Baron, a red wine of world class quality.

Jefferson's Bourbon is a blender and bottler of spirits. Launched in 1997 by Trey and his father Chet Zoeller, a bourbon historian. First released in 1997, Jefferson’s has several offerings in their lineup, and utilizes very innovative and experimental blending and aging techniques. Trey Zoeller likes to mix things up at Jefferson’s, experimenting with a variety of wood treatments used to mature their whiskeys. Through this experimentation, Zoeller taps into the vast uncharted potential of the whiskey industry, delivering highly nuanced, artful spirits. He chose the Pichon Baron wine and toasted French oak wine cask staves to complement the complexity of their Kentucky Straight Bourbon. And the result is nothing short of harmonious.

A limited number barrels are hand-selected for the process, being refilled with Jefferson’s Reserve and aged in a “hot box” environment, creating a truly distinct whiskey, combining the “robust flavors of the Bordeaux, the wood notes of both American and French oak and the grain of a premium bourbon in a delicious, complex and balanced final product” (producer).

Notes of robust flavor of Bordeaux, toasted American and French oak on the nose. Strong flavors on the palate, with hints of chocolate and fresh brewed coffee. The finish is fruity and spicy with a very pronounced wine-forward flavor that lingers on the palate.