Learn more
Size750mL Proof92 (46% ABV) *Please note that the ABV of this bottle may vary
This two-time “Irish Whiskey of the Year” includes whiskeys aged in port casks, as well as whiskeys that may exceed twenty years in age.
Notify me when this product is back in stock. 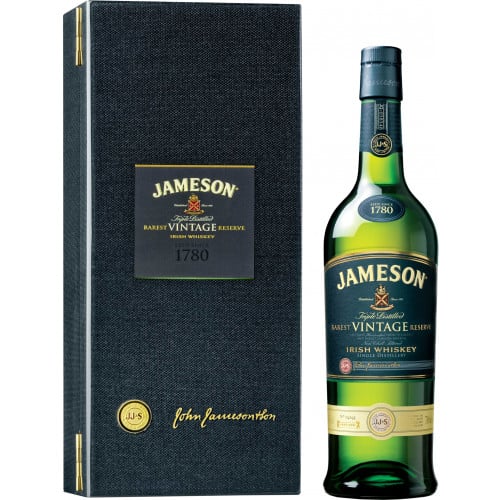 Jameson Rarest Vintage Reserve Irish Whiskey is a truly exceptional blend of whiskeys — a combination of grain and port-pipe pot still whiskeys, it includes specimens which have been aged in port casks, as well as whiskeys which may exceed 20 years in age. As a result, this beautiful creation has an aroma of fruit, ripe berries and banana nut bread, which leads to a silky palate filled with flavors of toasted wood, port, rich fudge and tangerines. The finish, slightly sweet, has hints of vanilla, cake icing, maple syrup and nutmeg.

Make sure you pick up a bottle today, before it’s all gone!

Aroma of fruit, ripe berries and banana nut bread, which leads to a silky palate filled with flavors of toasted wood, port, rich fudge and tangerines. The finish, slightly sweet, has hints of vanilla, cake icing, maple syrup and nutmeg.