Size600mL Proof80 (40%ABV)
Start the countdown with this box of 12 mini bottles (50 mL) of Jack Daniel's Whiskey. Inside, you'll find the Classic Old No. 7, Single Barrel Select, Gentleman Jack, Tennessee Rye, Jack Honey, Jack Fire, and Jack Apple expressions.
Notify me when this product is back in stock. 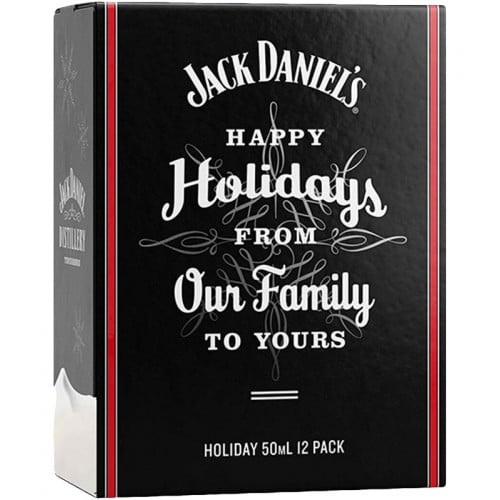 Jack Daniel's Holiday Calendar contains 12 mini bottles (50 mL) of various Jack Daniel's expressions that range from the iconic classics to rye and flavored whiskey. Inside, you'll find 2 bottles of the Old No. 7, a single bottle of the Single Barrel Select, and a single bottle of Gentleman Jack. The Tennessee Rye, Jack Honey, Jack Fire, and Jack Apple are included as well with 2 mini bottles of each. It's the perfect way to get into the holiday spirit with some Jack Daniel's.

Explore the aromas and tastes of various Jack Daniel's expressions, ranging from the classic and iconic to premium and flavored whiskeys.