Learn more
Size750mL Proof96 (48% ABV) *Please note that the ABV of this bottle may vary
This new annual release from Jack Daniel's is bottled directly from a "Barrel Tree" erected in the center of Lynchburg, Tennessee's town square.
Notify me when this product is back in stock. 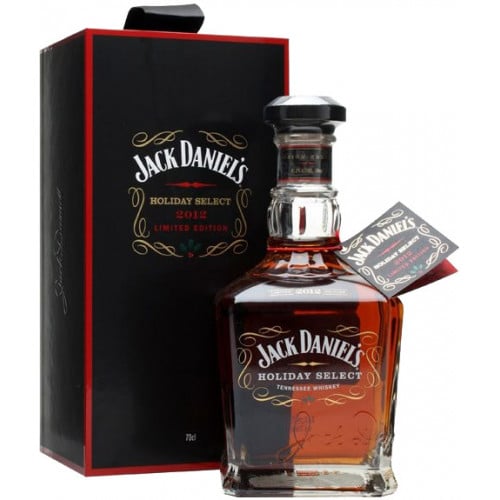 Jack Daniel's Holiday Select Tennessee Whiskey pays homage to Jack Daniels through the creation of rich new tradition in his hometown of Lynchburg, TN . Each year, the Jack Daniel's Distillery now erects a Barrel Tree — 140 barrels stacked 8 metres tall and hand-built by workers in Lynchburg — in the center of Lynchburg's town square. Once a year, whiskey from those barrels is then bottled straight from the Barrel Tree in a celebration of Jack Daniel's spirit, making each annual release truly one-of-a-kind.

The whiskey is made from a mash of corn, rye and malted barley. Once the ingredients have been mashed, they are fermented with a proprietary strain of yeast and iron-free cave spring water. Following fermentation, the wash is distilled and the resulting whiskey is then filtered through 10 feet of charcoal. This filtering process, known as the Lincoln County Process, earns the whiskey the title of "Tennessee Whiskey" and imparts a signature, sweet yet smoky flavor profile.

As a result of maturing in the Barrel Tree, Jack Daniel's Holiday Barrel Select Limited Edition Tennessee Whiskey releases an aroma of rich apple and blackberry tones countered with sweet, heavy oak notes. Apple and oak follow through in the taste, while stronger undercurrents of cinnamon and nutmeg linger warmly on the finish.

Pick up a one-of-a-kind whisky bottled as part of a new Tennessee tradition today!

Aroma of rich apple and blackberry tones countered with sweet, heavy oak notes. Apple and oak follow through in the taste, while stronger undercurrents of cinnamon and nutmeg linger warmly on the finish.