Size750mL Proof94 (47% ABV)
This limited edition bottle was created to commemorate country singer Eric Church's Double Down US tour.
Notify me when this product is back in stock. 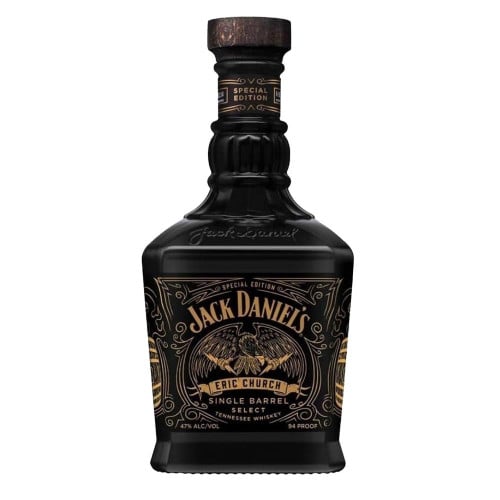 To craft Jack Daniel’s Single Barrel Tennessee Whiskey, master distiller Jeff Arnett of Lynchburg, TN first selects one out of every hundred barrels for its unique and expressive qualities. Once these special casks have been identified, they are moved to the very top of the distillery’s rickhouses, where extreme temperature changes facilitate dramatic interactions between the whiskey and the wood (by law, “Tennessee whiskey” must be aged in new, charred American oak barrels). Finally, each barrel is bottled individually at 94 proof, resulting in truly “one-of-a-kind” flavors in every bottle. The proceeds from This Jack Daniel’s exclusive Eric Church Edition Single Barrel bottle will help support The Chief Cares Fund. Each bottle comes in a collector box with a metal tag.

Uniquely robust notes of toasted oak, vanilla, and caramel. The palate is sweet with a strong caramel and vanilla presence enhanced by toasted oak flavors, fruit and lingering oak wood on the finish.