Caskers Rewards members earn up to 55 store points back when buying this bottle.

Size1000mL Proof100 (50% ABV)
Built on the same foundation as the iconic Black Label, this expression celebrates the 150th anniversary in style ― with a complex, rich, and intense 100-proof twist on the classic Tennessee whiskey.
Notify me when this product is back in stock.

Caskers Rewards Caskers Rewards members earn up to 55 store points back when buying this bottle. Learn more
Out of stock
Skip to the end of the images gallery 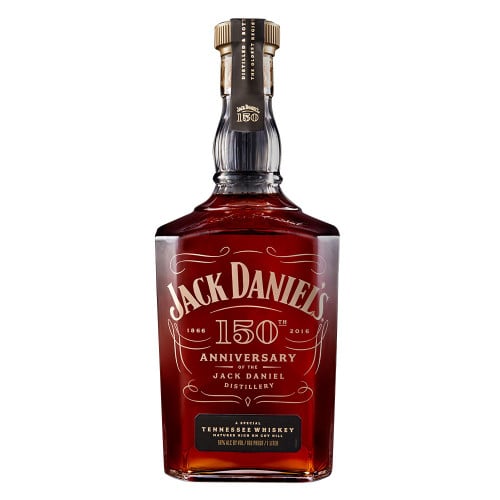 It is fitting, then, that the 150th Anniversary Tennessee Whiskey expression should build on that legendary spirit. Crafted using the same mash bill (80% corn, 12% rye, and 8% barley) as the Black Label, this milestone celebration brings together the skill of Jack Daniel's distillers and coopers, resulting in a rich and complex whiskey that's barreled in slow-toasted American oak barrels and bottled at 100 proof. The delicious expression is intense with a classic Tennessee whiskey profile.

The nose opens with vanilla, caramel, barrel char, and fruit aromas. The palate has more fruit and vanilla, along with toffee, spice, orange zest, and oak. The finish has lingering wood notes.