Size750mL Proof97 (43.5% ABV)
This expression marks the first time in 100 years that Jack Daniel's is releasing an age-statement whiskey that is at least 10 years of age. Bottled at 97 proof, the 10-year-old is an intense spirit with butterscotch, (dried) fruit, and spice notes. 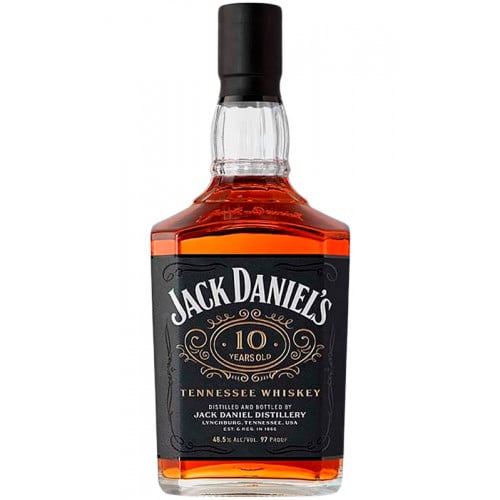 2021 is a special year for the brand. The release of Jack Daniel's 10 Year Tennessee Whiskey marks the first time in more than a century that the brand is releasing an age statement whiskey that's at least a decade old. Recently adding additional stills and fermenters allowed the distillery to age the whiskey for a longer amount of time. The handmade oak casks were aged in the Buzzard's Roost of their barrelhouse, then relocated to lower floors of different barrel houses, allowing the process to be extended. The resulting whiskey is intense with warm butterscotch, soft fruit notes, and a long finish. The limited-edition 10-year-old is bottled at 97 proof.

Grab a bottle of this 10-year-old Jack today!

The nose is sweet and fruity with oak, banana, dried figs, and raisins. On the palate, you'll find warm butterscotch and soft fruit notes, culminating in a long, sweet, and nuanced finish with tobacco and spice notes.