Size750mL Proof80 (40% ABV)
J.J. Corry Battalion is the world’s first Irish whiskey made using tequila and mezcal casks to influence its flavor. This is the second edition.
Notify me when this product is back in stock. 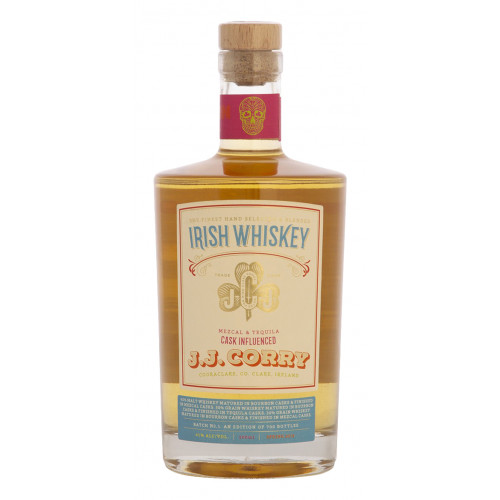 About J.J. Corry ''The Battalion'' Batch No. 2 Irish Whiskey

Founded in 2015 by Louise McGuane, J.J. Corry Irish Whiskey is Ireland’s first modern Whiskey Bonder. Irish Whiskey Bonding is a traditional business model whereby Bonders, typically publicans and mercantile owners all across the Island would source casks and new make Whiskey Spirit which they would age and blend for local customers.

Throughout the golden age of Irish Whiskey in the 19th century, most Irish Whiskey was blended by and sold to consumers by the Bonders. However, the practice died out in the 1930s with the near collapse of the Irish whiskey industry, after which all aspects of Irish Whiskey production & sales were undertaken by the distilleries. With the decline of bonding, Ireland lost 100's of regional and local styles of whiskey and the art of blending fell out of focus. J.J. Corry Irish Whiskey has resurrected this lost art of Irish Whiskey Bonding, under the brand of the renowned 19 century local Whiskey Bonder, J.J. Corry from Co. Clare.

The company sources new make Whiskey Spirit from Irish distilleries and matures it in a purpose built bonded rackhouse on the McGuane Family farm in Cooraclare, Co. Clare, right along the Wild Atlantic Way. Whilst waiting for their spirit to come of age, they source & blend rare mature whiskey to create their own unique house style. Named after a Bicycle that J.J. Corry invented, in tribute to his entrepreneurial spirit, their first release, J.J. Corry ‘The Gael’, is classic style of blended Irish Whiskey, bursting with juicy fruit flavors and underlying complexity. It contains unusually mature whiskies for an Irish blend.

The Battalion is named in honor of the Battalion San Patricos, (Saint Patrick’s Battalion) a group of Irish men who fought for Mexico in the Mexican/American War of 1846-1848. The Battalion was comprised mainly of Irish Immigrants, many from the West Coast of Ireland, who had defected from the American side to fight for Mexico.

This 2nd Edition Battalion is a blended Irish Whiskey with mezcal and tequila cask influence. Comprised of a 60% 9 Year old Grain and 40% 13 Year old Malt Blend and bottled at 41%. J.J. Corry Battalion is the world’s first Irish whiskey made using tequila and mezcal casks to influence its flavor.

Fresh grassy notes on the nose, followed by apple, citrus and nuttiness. The palate is tangy with a hint of tropical fruits, nuts, and herbal earthy notes of agave. On the finish are notes of oak spice and iodine with a whisper of agave and herbs.