Size750mL Proof95 (47.5% ABV)
American Freedom Distillery’s Horse Soldier Small Batch is an award-winning wheated bourbon, made from a mash bill of 70% corn, 20% red winter wheat, and 10% malted barley. Made from small batches of meticulously blended mature whiskey, this luxuriously smooth expression is perfect for sipping neat or over ice.
Notify me when this product is back in stock. 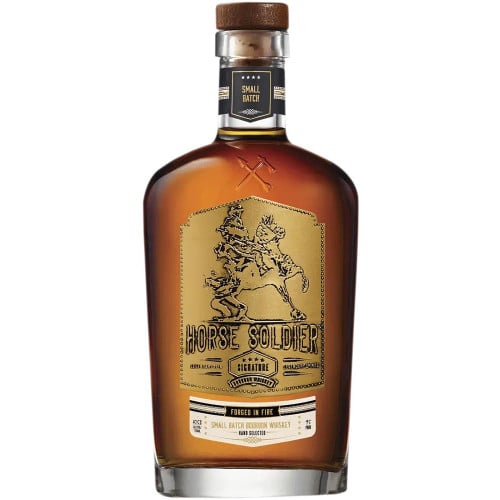 The American Freedom Distillery was established by two ex-Special Forces veterans Scott Neil and John Koko, and Koko’s wife Elizabeth Pritchard, who picked opening a distillery in Florida as their next big adventure. They started making their spirits well prepared. They visited a myriad of craft distilleries in the US, and travelled to Scotland and Ireland to learn about the art of whiskey-making from some of the best distillers. The team never ceases to learn, continually improving their processes on their mission to create authentic American bourbon. They bring art and science together to create handmade spirits, which have already earned the distillery the highest honors from world spirits competitions.

At their Florida distillery, located in St. Petersburg, the American Freedom Distillery makes their artisanal rums, vodkas and gins. However, Florida is too hot for making whiskey, so their bourbons are produced in Columbus, Ohio, through the collaborative distilling process of Middle West Spirits. The company is planning on opening a flagship production plant in Somerset in Pulaski County, Kentucky, in the near future. Horse Soldier is an authentic all-American, award-winning bourbon whiskey. It is named after brave men who fought on the inhospitable, mountainous terrain of Afghanistan riding horses. Horse Soldier bottles are formed in molds that are made from the steel recovered from the World Trade Center after 9/11, commemorating the lives lost and never forgotten, and honoring the spirit of resilience and service that arose in the nation on that day.

Horse Soldier Small Batch is a wheated bourbon, made from a mash bill of 70% corn, 20% red winter wheat, and 10% malted barley. Made from small batches of meticulously blended mature whiskey, aged in American oak, and non-chill filtered, Horse Soldier bourbon is bottled at 95 proof for a decadent experience.

Apples, honey, vanilla and caramel on the nose lead to oak, creamy toffee, dark stone fruits, ginger, cola and vanilla on the palate. The finish is long and warm.