Size750mL Proof90 (45% ABV)
Aged for five years in American oak casks, this whiskey is matured for an additional two years in casks that were previously used to mature wine.
Notify me when this product is back in stock. 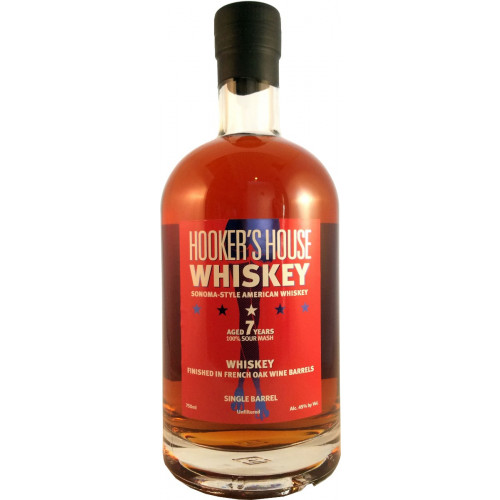 Born in Kentucky and finished in Sonoma county, Hooker’s House Sour Mash Whiskey pays tribute to Joseph “Fighting Joe” Hooker, an infamous Union General during the American Civil War. Although Hooker’s decisions on the battlefield were often questioned, his love of whiskey and women were not.

Hooker’s House Sour Mash Whisky is made from a mash of fresh, plump grains. Once the grains are harvested, they are fermented with a proprietary strain of yeast. By using sour mash to catalyze the fermentation process (sour mash refers to the art of using a small amount of spent mash from an older batch of whiskey in order to catalyze fermentation in a new batch of whiskey), Hooker’s House is able to maintain consistency with each bottling. Following fermentation, the wash is distilled in Kentucky before being matured in charred, American oak casks.

After the whiskey has aged for five years in the American oak casks, the whiskey is finished for two years in premium French oak barrels that were previously used to mature wine. This finishing process adds hints of apricots, lemons, pears, apples and citrus to the backbone of caramel, vanilla and butterscotch.

The bold and aggressive character of Hooker’s House Sour Mash is matched only by General Hooker’s indulgent and hedonistic lifestyle. The spirit and legend of the General live on in Hooker’s House. Now you can indulge yourself too.

Hints of apricots, lemons, pears, apples and citrus to the backbone of caramel, vanilla and butterscotch.