Caskers Rewards members earn up to 6 store points back when buying this bottle.
Size750mL Proof94 (47% ABV)
Aged for up to 21 years, this bourbon pays homage to Joseph "Fighting Joe" Hooker, an infamous Union General during the American Civil War.
Notify me when this product is back in stock. 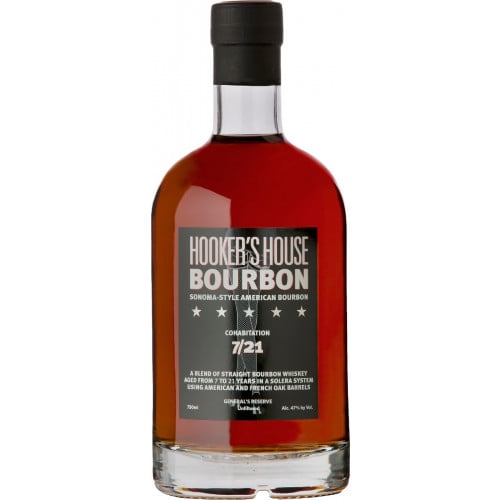 Born in Kentucky and bottled in Sonoma county, Hooker's House Solera-Aged Cohabitation Bourbon pays tribute to Joseph "Fighting Joe" Hooker, an infamous Union General during the American Civil War. Although Hooker's decisions on the battlefield were often questioned, his love of whiskey and women were not. "Cohabitation Bourbon is an experiment in blending and aging bourbon," says Fred Groth, the founder and master blender at Prohibition Spirits. The bourbon is made by blending together bourbons that have aged 7, 8, 11 and 21 years.

"We used a modified solera system of aging and blending the bourbons together," says Groth. Solera aging is a process that has generally been reserved for aging cognacs, ports and sherries. It involves filling a series of casks at different intervals over a long period of time. As whiskey from the oldest cask is emptied and bottled, the cask is re-filled with an equivalent amount of whiskey from the second-oldest cask in the solera. This cascading effect continues until the youngest cask in the solera is filled with new whiskey. As a result, no cask in the solera is ever fully emptied. In addition, as the younger whiskey ages and cascades through the solera, its average age and complexity gradually increases over time.

"In our solera, the new bourbon chased the older bourbon through seven unique barrels," says Groth. "The barrels included the original twenty-one year old American oak barrels, newer American oak casks, Bel Aire French oak barrels that were previously used to mature a Napa Cabernet and a brand new Eclat French oak barrel. We chose the Eclat because it uses a ceramic element to toast the oak which allows for a super deep toasting without burning the wood. This means the bourbon can penetrate the wood without being blocked by charcoal, giving the bourbon deep caramel notes without traditional burnt wood characters."

Hooker's House Solera-Aged Cohabitation Bourbon has a dark amber hue, with notes of dark chocolate, sweet vanilla, caramel and roasted corn on the palate. The initial flavors give way to complex notes of roasted nuts, fudge and a hint of warming spices.

The bold and daring character of Hooker's House Bourbon is matched only by General Hooker's indulgent and hedonistic lifestyle. During the Civil War, Hooker kept the morale of his troops high by hosting a group of progressively-minded woman at his army headquarters. The women were affectionately referred to as the Hooker's Brigade, and later, just Hookers.

The spirit and legend of the General live on in Hooker's House Bourbon. Now, you can indulge yourself too.

Dark amber hue, with notes of dark chocolate, sweet vanilla, caramel and roasted corn on the palate. Initial flavors give way to complex notes of roasted nuts, fudge and a hint of warming spices.